One event that came as a result of Ingram’s diagnosis was an Undefined Improv show in her honor.

Junior Micah Bounds had Ingram as a teacher his freshman year for ALARP I and also performed in the show.

“Freshman year I remember she would talk about her previous battle with breast cancer. It was really cool that I got to be part of her journey because I wasn’t a part of her first one,” Bounds said.

He also recalls that Ingram created a welcoming environment in her classroom, starting with her openness about her journey.

“It was interesting to have a teacher who was so open about it. It made me feel more comfortable to share something that is personal to me in class, whether in a presentation or a personal conversation,” he said.

Theatre teacher Natasha Fischer found out about Ingram’s resurfacing through an Instagram post and at once wanted to contribute in any way she could.

“I immediately reached out and said ‘What can I do?’. Her sister had posted this stuff about her GoFundMe, so I donated what I could and then I thought, ‘I have to do more’,” Fischer said. “A lot of people don’t know this but I suffered from postpartum depression after I had all three of my kids. I struggled every day to get up and get out of bed, I struggled to feel like I had a purpose. It was a lot that I was dealing with emotionally and mentally and I would always turn to her [social media]. It sounds weird and crazy like I’m a stalker but she always posts really funny things. I would go to Jenny’s page all the time. When I saw the [post about her cancer resurfacing] it was just jaw-dropping, I cannot believe that this is happening and she was still positive. She’s the most positive person I’ve ever met in my life.”

In addition to hosting a show in Ingram’s honor, Fischer wanted to contribute on a more personal level, so she decided to donate her hair during the show in support of Ingram. 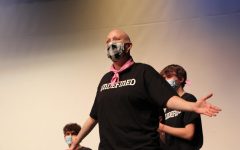 She means so much more than she ever will know because in that time when I was in a dark place, she was making me laugh and making me happy just by her posts so I had to do something.”

“I knew [Ingram] had donated her hair because she had sent a post out about what was happening and I got very moved and emotional about it and then she posted about shaving her head with her sister. In that moment I was like ‘Yeah I’m gonna cut my hair for her’. I don’t know what specifically told myself to do that but I just decided. Originally, I was going to do it to my shoulders because I had 12 inches up to my shoulders. She took that first cut and was like ‘Oh my God I think I went too short’ and I was like ‘I don’t even care’. Someone showed me how much money we had raised right before that and I was like, ‘You know what? Just cut it all off. I wanted $1,000 [raised] and we went past that so just take it all off’, so she did,” she said.

Fischer also put together a video to show Ingram during the intermission of the show which was a compilation of staff members sharing what Ingram meant to them. Originally, she was hoping the video would be five minutes long. It ended up being 12.

“So many people wanted to say so many things. That’s how loved that woman is in this school and how much she has touched people. I hope she knows how appreciated she is. The whole show I just wanted her to feel loved and if she felt even the tiniest bit of love from that moment, I did my job,” Fischer said.