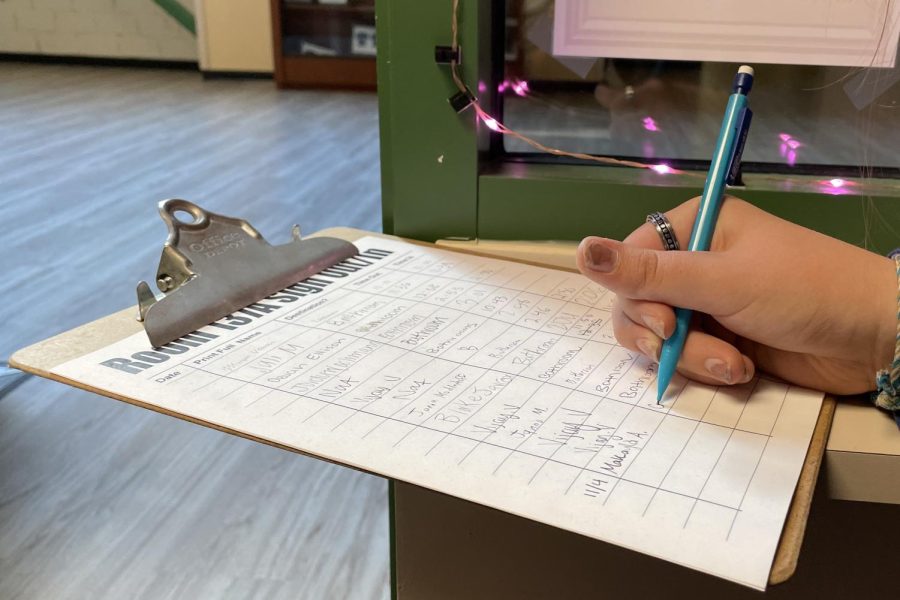 To aid with contact tracing during the 2020-2021 school year, teachers placed QR codes or sign-out sheets in their rooms that were linked to forms students filled out. The forms included information on where a student was going in case contact tracing was needed.

“Contact tracing has taken a toll on district staff over the last year and a half and we wanted to take this added responsibility off their plates so they can devote their time and energy to regular responsibilities, such as supporting students,” Mary LaPak, Executive Director of Communications for Rockwood, said.

During the 2020-2021 school year, contact tracing, a process to identify students possibly exposed to COVID-19 by another student who tested positive, was performed by school nurses and administrators. As a way to ease the workload on school nurses and administrators, the Rockwood School District (RSD) has entered into a contract with a Maryland-based company called Maxim Healthcare Staffing Solutions Inc. that involves Maxim employees aiding in the contract tracing process at RSD. The contract was supposed to start on Oct. 18 and end on Dec. 31 with an option for renewal for the second semester, however, the starting date was pushed back and the current starting date is unknown.

The delay is because Maxim cannot find enough people to take contact tracing jobs according to Amy Wehr, the Director of Rockwood Wellness and Services.

“Maxim has had trouble hiring people as well. We were supposed to have 11 people start on Oct. 11, but that got pushed back to Oct. 18. We did have one person show up for training on Oct. 25. I think that just like everywhere else in the world or the US, [Maxim] finding people to work is a bit of a challenge,” Wehr said.

The new plan with contact tracing involves at least one Maxim employee at each of the four district high schools, and one at each district middle school.

“[The Maxim employees] will be working closely with the school nurses, as they are certified, nurse assistants. If they’re not contact tracing, they will be supporting the nurses in the nurse’s office,” LaPak said.

“The 20 minutes is only with not a lot of close contacts. It becomes longer once you add more and more close contacts,” Wehr said.

During previous surges of COVID-19, such as during summer 2020 and during the winter of 2020, the district did consider the idea of outsourcing contact tracing to a third party but decided not to do so for a variety of unspecified reasons, according to LaPak.

Ricker revealed the reason for the outsourcing of contact tracing operations.

“At the beginning of the year, we made sure to consider our experiences from last year, not understanding if the infection rates would be going up or down, and the workload of our nurses and administrators. We thought, ‘Well, if the infection and quarantine rates follow what we had in the past, Rockwood may need extra help in [contact tracing], especially after our Thanksgiving and Winter Breaks,’ ” Interim Superintendant Tim Ricker said.

As Maxim already has an existing contract with the State of Missouri, RSD was able to use that in order to develop their own contract with Maxim.

“We were able to kind of ‘piggyback’ off of the State of Missouri’s contract that already exists with [Maxim], but we have our own contract as well,” LaPak said.

The total cost of this operation is $170,000. Though, LaPak stresses that amount is not all of the Federal ESSER III funds that the district received.

The district received $1,787,572 in Federal ESSER III funds from the government. Ricker also detailed the manner in how payment will work.

“Maxim provided their resources to the state, and since Rockwood is connected to the Missouri Department of Health and Senior Services, we had the ability to go straight to Maxim and work with them in setting up our system. The federal tax dollars were given to the district and they were meant for applications such as contact tracing. The money will pay Maxim directly and there is no crossover between Maxim and the state,” Ricker said.