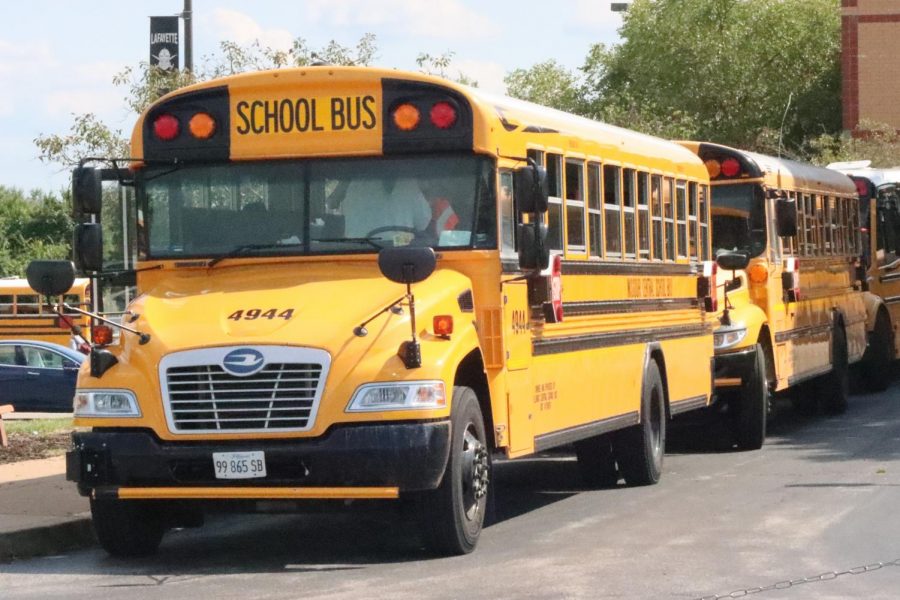 After school on Sept. 1, 2021, Rockwood School District (RSD) buses wait for students to board outside of Lafayette High School. This year, RSD is facing a bus driver shortage, which has resulted in routes within safe walking distance to the school being eliminated and others being combined in addition to certain after-school activity buses not being availible.

Bus driver Justin Berkey has worked for the Rockwood School District (RSD) for 12 years. On a typical day, he wakes up at 5:30 a.m. to drive his  routes, which include the high school, the Center for Creative Learning (CCL) and any other trips he is asked to make.

“It’s usually two and a half hours in the morning and three in the afternoon. [These hours] allow me to do other projects for the district [including] midday cafeteria work and Early Childhood routes [among other tasks],” Berkey said.

However, many drivers’ routines have changed this year as a result of the district-wide bus driver shortage Rockwood is facing.

RSD Director of Transportation Mike Heyman said, “The root of the problem for transportation and busing in general for all school districts is the lack of drivers. COVID probably initiated that, but for the last 15 years, the applicant pool for driver candidates has been shrinking.”

“To be a bus driver requires dedication, you have to get up and be at work before kids get to their bus stops because you have to prepare your bus and you have to drive to the first stop. So your day starts probably at 5 a.m. You go through and you do all your a.m. routes, a middle school, a high school, then you do an elementary school. Then you drive your bus back and then you don’t have anything to do until 2 p.m.,” Heyman said.

Since the beginning of last school year, Heyman said he’s lost 44 drivers. At one point, RSD transported about 13,600 students to and from school every day. Heyman predicted that with the adjustments he had to make this year with no transportation zones and combined bus routes, RSD would be able to support transporting 10,000 students. Since then, the number of students the staff has been able to transport has increased to 11,000.

“Percentage-wise, [we’re] transporting more [students] with less drivers. I’m trying everything I can to do it. I let all these families know that they didn’t have busing transportation back in June. I wanted to make sure that the parents of this district had that notification because I wanted to give them every opportunity they could to go through their resources, [so] that they would have a plan,” Heyman said. “Our first priority is getting kids from home to school and from school to home. The next [priority] falls into extracurriculars for mainly high schools. Students want to get the entire experience of high school and participate in athletics and after-school activities. The problem lies [in] a lot of those activities coincide with home to school, or school [to home transportation].”

In addition to the elimination of routes within safe walking distance to the school and combined bus routes, Voluntary Interdistrict Choice Corporation (VICC) transportation for after-school activity buses has also been limited.

Activities director Jonathan Sumner said, “VICC transportation [has a] 4:45 p.m. bus [on] Mondays and Wednesdays and then every day a 6 p.m. bus. Any program that has weekend events or games, puts in their own transportation and we have transportation for kids that are VICC students.”

Currently, Lafayette is still able to provide all their Missouri State High School Activities Association (MSHSAA) programs with transportation with the altered activity bus schedules. In addition to that, clubs have adjusted to meet on Mondays and Wednesdays to ensure the opportunity for all students to attend. Sumner also anticipates that AcLab will benefit clubs to have meetings during the school day to make up for the lost time after school.

Senior Zakee Branch is an active member in theatre after school and before the bus schedules changed, used to stay after school to get some of his work done or for rehearsals before heading home on the early after-school activity bus.

“The new changes messed me up completely. Since I do Undefined I feel left out because I have to miss rehearsals. It’s just a thing where you hope it changes in the future to help students because now it’s definitely harming a lot of students,” Branch said. “I’m used to staying after school for a study hall or theater. Some students find that staying after school can be a time to get things done because at home you get easily distracted. For now, changes haven’t been major but in the future, I can see it being a problem since the Fall Play and Musical are underway.”