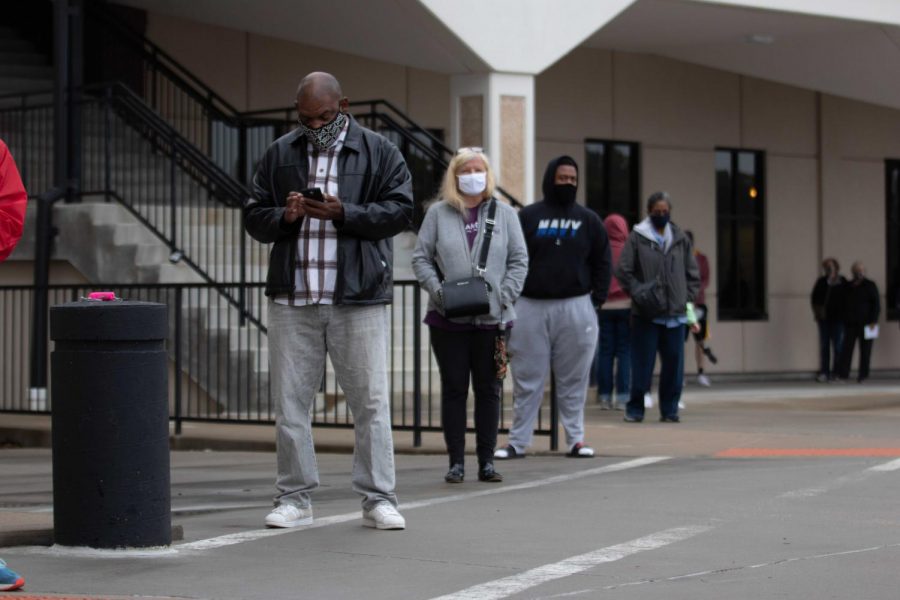 “Voting is incredibly important for our republic to stay a republic. Even if the presidential candidates aren’t necessarily who you want them to be, we still have things like local and state elections that determine where and how things like education and transportation get funded and more local policy like housing laws that are passed that personally affect you in the state you reside,” senior Paul Briginets said.

Briginets is one of the many seniors voting for the first time in this election.

According to data from the United States Census Bureau, the number of voters who were 18-29 years old jumped by 79% in 2018 during that year’s midterm elections compared to the turnout in the same age group during the 2014 midterm elections.

And, the predictions for voter turnout in this election are already breaking records. CNN reported on Nov. 1 that with just three days until Election Day, pre-election voting has now surpassed two-thirds of all ballots cast during the 2016 presidential election.

A poll released Oct. 26 by Harvard University’s Institute of Politics surveyed 18- to 29-year-olds and reported that “63% said they would definitely vote in the election.” That is highest percent in the 20 years the poll of young voters has been done. In 2016, the Harvard Youth Poll found that 47% of respondents said they would “definitely” vote in that year’s election.

In fact, As of Oct. 23, more than 1.2 million voters age 18-21 had already cast votes in 39 states reporting, according to Catalist, a company that provides data, analytics and other services to academics and nonprofit issue-advocacy organizations.

Dr. Nancy Miller is the Co-President of the League of Women Voters of Metro St. Louis.

“They [first-time voters] start developing the habit of voting, allowing them to fulfill their responsibilities as American citizens. Voting is one of the biggest opportunities for their voices to be heard,” Miller said.

Senior Tessa Clark also voted for the first time in this election.

“I voted because I believe that the fate of the feature is in our hands. I voted because I want to have a president that I can respect and respect the people. I think it is important, especially for first-time voters, to get to the polls, because while issues that may be up for debate may not affect you, they could be affecting your loved ones or peers. Voting in this election may not be about me, but the outcome will affect people that I love, so I am determined to do my part and encourage others to do the same,” Clark said.

This increase in political engagement by young voters was studied by the Center for Information & Research on Civic Learning and Engagement (CIRCLE) at Tufts University. Kei Kawashima Ginsberg is the director.

Ginsberg said they base a lot of their findings on  the number of young people, who may not have been eligible to vote in the last presidential election, but have taken to the streets to make their voices heard since 2016. She noted there’s a stereotype that some young people fed up with electoral politics will protest but not vote, but said CIRCLE has not found that to be true. She said, “March For Our Lives, the massive gun violence prevention demonstration that followed the high school shooting in Parkland, Florida, fueled youth engagement in the 2018 election and has driven even more young voters to the polls in 2020.”

And, ahead of the 2020 election, according to CIRCLE, 83% of 18- to 24-year-olds say they believe young people have the power to change the country and 79% say that the COVID-19 pandemic has helped them realize politics affects their daily lives.

“This is the first election that I can vote in, so that is particularly significant for me. I also think since we are in a pandemic, as voters we need to care more than ever about who is elected because people are dying and getting sick due to COVID-19,” Doel said.

Senior Madeline Mohlman will be voting during this election.

“[Voting] gives people a voice. It lets people have a say in what happens to the country. So much has happened this year, and how we respond to these things will affect our future so it’s important to go vote,” Mohlman said.

Those of age who are registered to vote can still vote absentee in St. Louis County until 5 p.m. on Nov. 2 at five locations throughout the county. Any voter who requested a mail-in ballot must return the ballot by 7 p.m. on Nov. 3.  The polls are open in Missouri on Nov, 3  from 6 a.m. and remain open until 7 p.m. Anyone arriving after the polling place has closed will not be allowed to vote. However, those individuals in line at 7 p.m. will be allowed to vote.