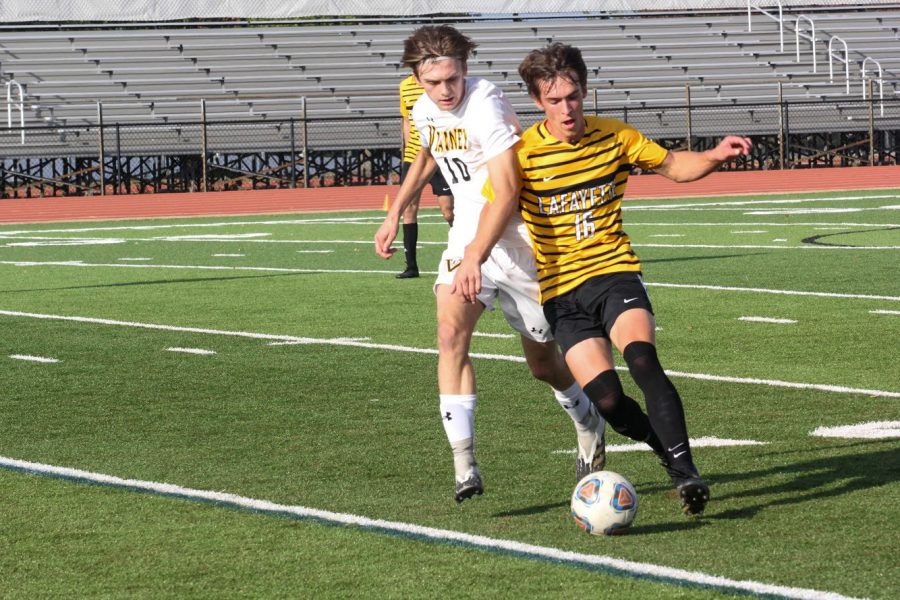 In a game against Vianney on Oct. 2, senior Luc Fladda dribbles around an opponent to get the ball upfield. The Lancers lost in their match against Vianney 3-1, with the only goal being scored by senior Mitchell Grant.

Boys Soccer: In a close battle, the Lancers lost 2-1 to the defending State champions, Rockwood Summit, on Sept. 28. The Lancers went on to gain their first season win, beating MICDS 2-1 in overtime. Captains junior Kaden Karr and senior Ben MacInnes scored the game’s goals. The following night the Lancers fell to Vianney, 3-1.

Boys Swimming and Diving: In their first event of the week, the Lancers swam against Francis Howell Central. The Lancers defeated the Spartans by a huge margin, 144-31.

Field Hockey: On Sept. 28, field hockey took victory in a close match against District rival Rockwood Summit, winning 2-1 in overtime. On Sept 29, the team shutout the Parkway West Longhorns, 6-0. The following two nights, the Lady Lancers played Marquette twice. On the first night, the Lancers won 5-0, and on the second night, they won 2-1. On Oct. 3, they played Eureka and dominated in a 7-0 victory. Currently, senior Mia Simpson ranks second in the Conference standings with seven goals and four assists.

Football: After Rockwood moved games outside of St. Louis County, the Lancers opened their season and faced off against rival Marquette High School on Oct. 3. Unfortunately, the Lancers fell 41-7. The only touchdown for the Lancers was a 23-yard pass from senior quarterback Blake Micek to senior Pernell Garner, with the extra point kicked by senior Josh Reynolds.

Girls Golf: Head Coach Katrina Clark and the team faced off against the Rockwood Summit Falcons, which Clark’s brother coaches. The Lady Lancers were victorious, winning 169-180, with senior Brooke Biermann shooting a 35 and junior Kate Worley shooting 41. The following night, the team took second in the Suburban Conference tournament, only losing to Rockwood Summit by three points. Biermann was the Conference medalist, shooting a 71, one under par.

Girls Tennis: As they prepared to wrap up the season, the girls tennis team played Cor Jesu, and won the match 7-2 on Sept. 28. In their next match on Sept. 30, the Lady Lancers swept the Marquette Mustangs, 9-0. They did the same against the Kirkwood Pioneers, 9-0 on Oct. 1. Beginning their run in Districts on Oct. 2, the team played the quarterfinals for both individuals and doubles. Junior Trisha Kosaruju and sophomore Saanvi Gudreddi won their individual matches, and in doubles play, seniors Erin Reynolds and Emma Tobin won their matches. Kosaruju was able to advance to the State tournament after winning her matches on Oct. 3, and Reynolds and Tobin qualified for the doubles tournament.

Girls Volleyball: On Sept. 29, the Lady Lancers faced Parkway West, sweeping the Longhorns in two sets. Later in the week, on Oct. 1, the team played St. Dominic, going to five sets as Lafayette had to come from behind and won the last three sets for the victory. Then the Lady Lancers struck it home as they beat Kirkwood in three straight sets on Oct. 2, and did the same in their game against Lindbergh on Oct. 3. The team is now 6-0 in the season.

Softball: To kick off their five-game week, the Lady Lancers played Parkway West and won 7-4, taking revenge from being knocked out of Districts by Longhorns in 2019. The following day on Sept. 29, senior Landee Wasson pitched a shutout and hit a three-run home-run, boosting the final score to 4-0 against St. Joseph’s Academy. Junior Kaley Adzick pitched another shutout the following night, in a 10-0 rout of Lindbergh. On Oct. 1, the team celebrated Senior Night with a 10-0 victory over Seckman, where senior Kathryn Flowers hit a home-run. Flowers hit another home-run in the team’s annual “Pink Game” against Marquette on Oct. 3, where the team works to raise awareness and money for breast cancer research. With Flowers’ home-run, and a well-placed bunt by junior Gina Betancourt that scored a run, the Lady Lancers beat their Marquette rivals, 2-1.