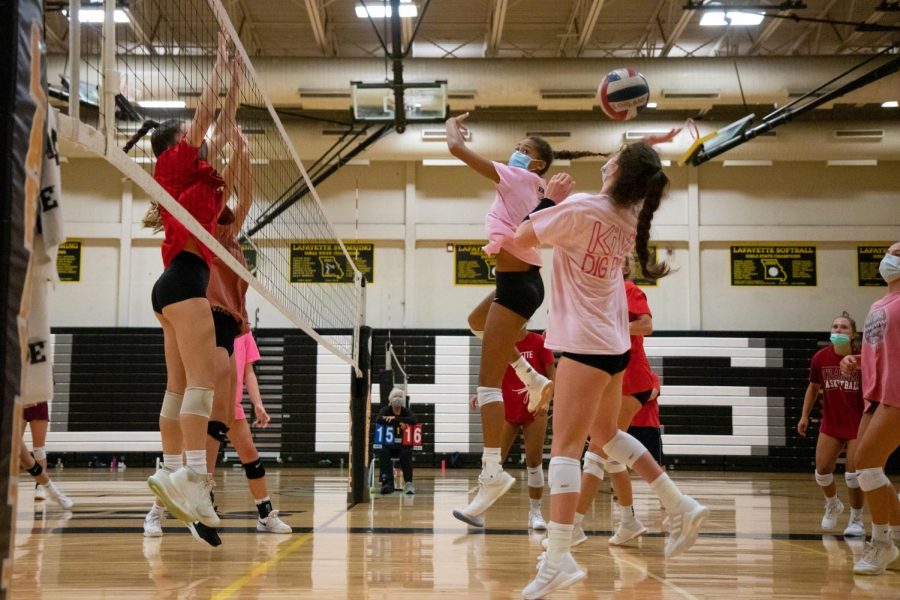 In a scrimmage against other team members, junior Paige Borgmeyer sets up to hit while her teammates attempt to block her. The volleyball team won began their season this week, winning matches against Incarnate Word and Francis Howell.

After an announcement from Rockwood on Sept. 18, moderate-contact sports began playing games for the first time all sports season, outside of the county. Those sports include boys soccer, field hockey, girls volleyball and softball.

Boys Soccer: The Lancers began the season under the lights on Sept. 26 at Fort Zumwalt South. Unfortunately, the team lost 4-0. They look to tally their first win in their next game against State Champions Rockwood Summit on Sept. 29.

Boys Swimming and Diving: After a stunning start to the season last week against Wentzville Liberty, the Lancers fell to Parkway West on Sept. 21, with a final score of  150-70. In their meet the following day, they beat Oakville 105-80. On Sept. 24, the team fell to Ladue, 103-83.

Field Hockey: In their first game of the season,  varsity defeated their rival, St. Dominic, 5-1.

Girls Golf: In a match against Kirkwood on Sept. 21, the Lady Lancers won 159-203. Senior Brooke Biermann led the team, scoring a 30 in her round, which was six under par. Seniors Bailey Bridge, Grace Stewart, and junior Caroline Boyette all shot a 43 to help seal the Lancer victory. The following night, they lost a close match against Marquette, losing only by one point. On Sept. 24, the team lost against St. Joseph’s Academy, however, Biermann was a co-medalist and shot a 36 round.

Girls Tennis: The Lady Lancers almost went undefeated in their match against Parkway West on Sept. 21. Out of the nine matches, the team won 8. They did the same thing on Sept. 23, defeating Fort Zumwalt West 8-1. After falling to Parkway Central last week, the Lady Lancers avenged their loss and beat them, 6-3 on Sept. 24.

Girls Volleyball: On Sept. 23, the Lady Lancers took down their rival, Incarnate Word, in three straight matches. Next, they faced Francis Howell the following night. Once again, the Lady Lancers dominated and swept all three matches.

Softball: In the Lady Lancers’ first game of the season, they played out at Wentzville Liberty High School on Sept. 23 taking a big 11-1 win. The following night, they faced Northwest High School and squeaked by, winning 6-5 with the help of home runs from sophomore Lillian Ware in the first inning and senior Landee Wasson in the extra eighth inning.