2021 District champion wrestler steps aside due to injury 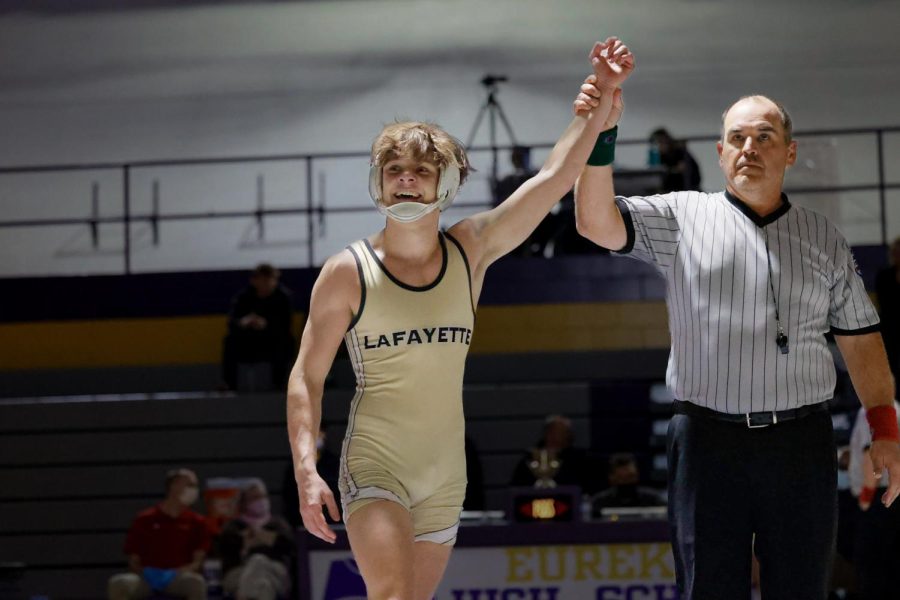 Senior Lane Tenny is declared the winner after a match in the Eureka Duals on Jan. 5. Lane only wrestled a limited amount of matches in the 2021-2022 season.

“[Lafayette wrestling] means a pretty good amount [to me] because I was put in a bit of a leadership role this year. I love that team so much,” senior Lane Tenny said.

Lane got into wrestling after watching his younger brother participate in the sport for a year.

Lane’s father, Durwood Tenny, said, “His little brother started wrestling before him and he asked me whether he should wrestle or not. I was excited when both my kids would be at the same place on Saturday and Sunday.”

Lane was a member of the varsity boys wrestling team all four years of high school, winning a District championship in 2021. However, sickness and an injury to his hand have forced Lane to step away from wrestling during his last high school season. Lane said that he would have originally wrestled 40-45 matches, but instead only wrestled about 17 matches.

“He’s been sick this year, like six or seven weeks of different sicknesses. He would start feeling better and within a week something else would come up,” Durwood said.

Lane said he was in disbelief about the way his wrestling career ended unexpectedly.

“My last moments of wrestling, [though] I don’t mean this in a depressing way, I’m not happy with them at all. The one thing I thought was, ‘this is how it ends.’ I always imagined hugging my dad [at] the Mizzou Arena under the lights,” Lane said.

Lane said that he feels nothing but pride about his time as a member of the varsity wrestling squad. Durwood said that Lane was very consistent in his off-season training.

“He was always lifting [weights] during that time. He went to Disney every year for these national duals and he had a lot of fun down at the Disney Duals each year. Cutting weight sucks. That’s work, even though you’re doing nothing. It dulls your mind. You can’t focus and think in school as well and your mood is different. And it’s a pretty rough thing to watch,” Durwood said.

“Lane is a fantastic young man that has a big heart. He was a leader all season long and has truly left his mark on the program by the energetic way he leads. We wish him luck in the future and hope he carries that same energy, commitment and leadership to everything he tackles in the future,” Wier said.

Even though Lane is injured, he did accompany the varsity boys and girls wrestling teams to State.  He has received offers from colleges to continue wrestling in college, but has no plans to continue. However, Lane said that he would like to coach wrestling after college since he is interested in education as a career and wants to coach freshman wrestling or girls wrestling.

“I’m pretty sure my wrestling career is finished after high school. I want to focus on my education and stuff like that,” Lane said.