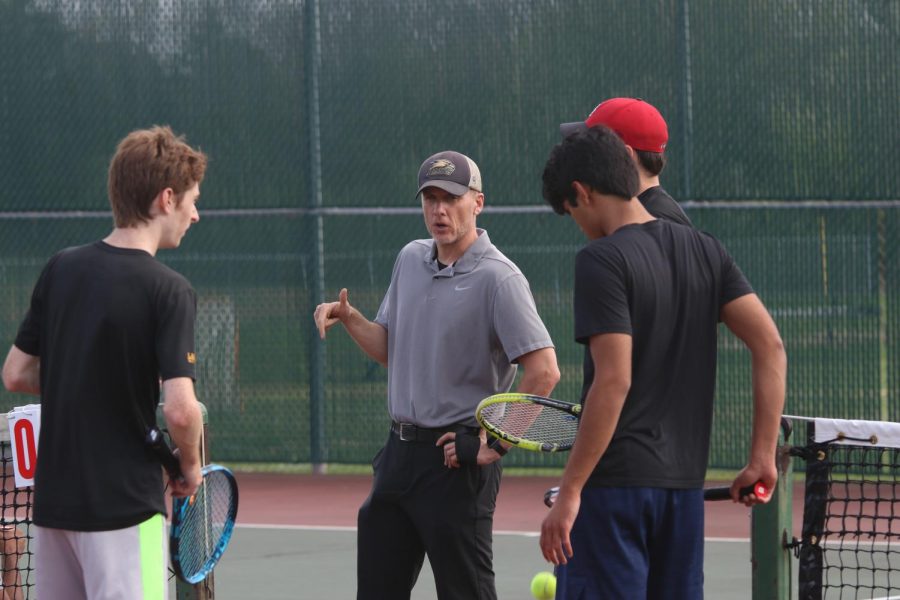 Varsity boys tennis head coach Mark McAllister speaks to team members during the Lancer's match against Ladue. The Lancers have a 6-16 overall record against Ladue after their match on April 12.

The Lancers scored their third victory of the season in dominant fashion against Marquette, 13-4, April 11. Their next game was against Memphis Hutchinson, which Lafayette lost, 23-11. These two home games brought their season record to 3-2. Next up, they face Rockwood Summit at home April 19. They will be traveling to Louisville, Kentucky to play against DuPont Manual at Sacred Heart Academy April 22.

Even with four games this week, the Lancers have reached an overall record of 5-2 so far. Though they lost, 2-0, to St. Dominic April 11, the Lancers came back with a shutout win April 14 against Kirkwood at home. In their strongest game so far, senior Rylee Howard scored four goals, seniors Anya Shawke and Lily Zehner each scored one goal, junior Ava Brown scored one goal and sophomore Emily Derucki scored another goal, all contributing to the 8-0 win. There were also six assists from senior Ana McClellan, sophomore Allie Kinner, Shawke and Derucki. McClellan has a lot of confidence in the team. “We all have the effort it takes to win games and the effort to genuinely want to grow as players and as teammates. Those are the things I believe make up a great team,” she said. On April 15, the Lancers went to the Parkway Showcase Games at Lou Fousz and faced Metea Valley High School from Illinois, winning, 2-1. Senior Mikayla Morales scored both goals and Howard assisted. The team has another full week of games, facing Orchard Farm April 18, Visitation April 19, Rockwood Summit April 21 at home and Oakville April 23 at home.

The Lancers faced off against Oakville April 12 and lost in five sets. Oakville won three sets and the Lancers won two sets. Junior Matt Haefner and sophomore Clay Harmon both scored two points during the match. The Lancers were scheduled to take on Borgia April 13, but the match was cancelled due to inclement weather. The Lancers then took on Eureka April 14 and lost in five sets, with Eureka winning three sets and the Lancers winning two sets. Haefner had a strong showing, scoring seven points and recording 17 assists. The Lancers next take on Pattonville at Pattonville April 18 at 5:30 p.m.

The Lancers lost, 10-9 to De Smet April 11 despite a five goal performance from Senior AJ Ipson. Senior Dylan Vorbeck scored six goals in a 17-5 win over Pattonville April 14. The Lancers next home game is April 18 at 5:30 pm against undefeated Parkway West.