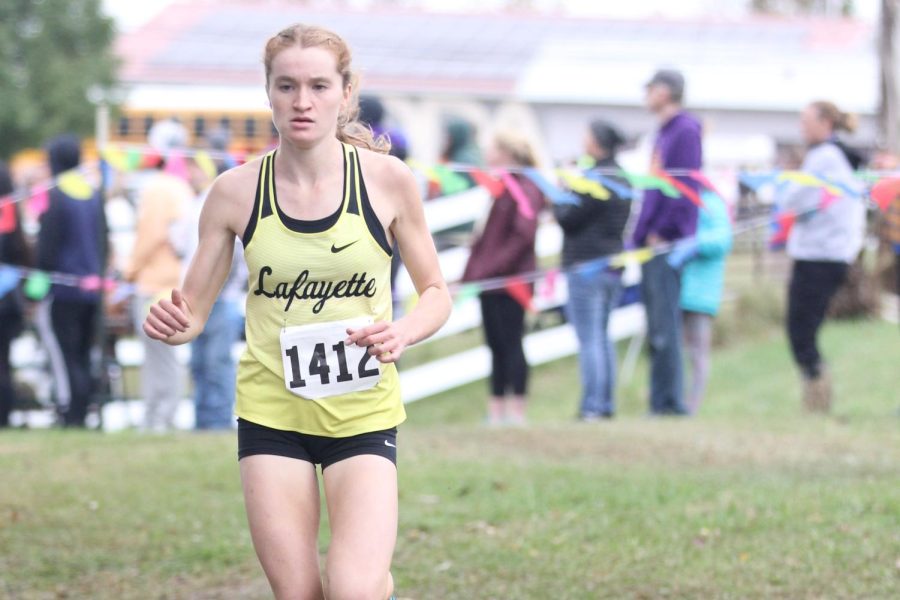 Junior Grace Tyson competes in Districts for Lafayette on Oct. 30, where they placed third overall. Tyson took second place in the meet with a time of 18:39.71 on the long courses.

Boys Cross Country:
On Nov. 5, the Lancers participated in the Missouri High School Athletic Association (MSHSAA) State Meet at Gans Creek Cross Country Course in Columbia, MO. The Lancers finished in sixth place as a team, with 197 points total. Individually, senior Nikolas Malek came in 17th place with a time of 15:48.3 and junior Lukas Groenewald came in 18th place with a time of 15:48.9. “I couldn’t be more proud of my team. Each and every one of us gave this last race our all. I was so thankful to be able to finish my high school cross country career with such great teammates and coaches. The thing I will miss the most is the brotherhood that my teammates and I have. We went through a lot together over these four years and we made so many great memories. I’m incredibly proud to have been a part of this program,” senior captain Bross Miller said.

Hockey:
Hockey team began its 2021-2022 season on Nov. 1 against the Priory Ravens at Maryville Hockey Center. The Lancers skated to an opening  victory, 6-3. Junior Andrew Knapp had the hat trick with three goals, sophomore Greyson Eble had two and senior Nathaniel Orf had one. The Lancers’ next game is Nov. 8 at the Maryville Hockey Center against Chaminade at 7:50 p.m.

Girls Cross Country:
The Lady Lancers’ finished their season with a sixth place finish at State on Nov. 6. Junior Grace Tyson was the individual State Champ with a time of 17:42.90. Tyson placed third her freshman year and second her sophomore year. Although she achieved a personal goal, Tyson said this win had a different feel since the team scored lower overall. “Winning this year felt different than last year. It was an amazing experience to win as a team last year and it was great accomplishing that goal as a whole team,” Tyson said. “This year was an individual win and it felt great to have achieved this goal of mine.” Junior Elissa Barnard, placed 11th with a time of 18:50.10. Barnard continually placed in the top 20s this season.

Football:
In the District Semifinal, Lafayette faced Rockwood Summit and lost, 27-0, ending the season. The Lancers finished with a 5-6 overall record.  Senior quarterback Brandon Keen joined the team last year after transferring to Lafayette. He said he appreciated being a part of the team and recognizes the hard work that went into their season. “This was a hard-fought season with plenty of challenges, but this team meant everything to me. We never gave up and sustained a high level of energy in practice every week. This program is full of amazing people and I am grateful to have been a part of it,” Keen said. Both senior linebacker Owen Butler and senior lineman Jack Clark have been playing football for Lafayette for all four years of high school and played together on the Junior Lancers before that. “I wouldn’t trade this team for the world. We had a bunch of ups and downs, but we went through it together. These dudes are my brothers for life,” Butler said. Clark also values the brotherhood of the team and appreciates their last game as another memory of playing with his teammates. “This team meant everything to me. These guys are my brothers and we went through a lot together. No matter what, getting to play one last game with these guys is a memory I’ll never forget,” Clark said.

Boys Soccer:
After a tough, 1-0 loss to CBC in the last 15 minutes of the District Semifinal, boys soccer ended their season with a 13-13-1 record. Although nine seniors are graduating, including captain Kaden Karr who was their leading scorer with 16 goals and 10 assists, the team is confident the underclassmen will step up next year. “The underclassmen on the team are very talented. This year, they understood the level of varsity and how different it was from JV or freshman. Next year they should expect to be the team everybody wants to beat because of how good they will be,” Karr said. “In the beginning of the season I never knew how talented and special we were going to be. If I could say one more thing to the team it would be thank you for making this season so exciting for me and never giving up.” Although the seniors are disappointed to end their season, they are thankful for the memories and relationships formed. “I think the season went in a positive direction. We all came out of the season as better soccer players but also better people and a closer family. I appreciate what [the] guys have done for me these past four years, having fun with me on and off the field. [They] have made me a better person and I’m going to miss seeing [them] everyday. Even though the season ended, the love I have for this family will not,” senior Diego Salem-Pon said.