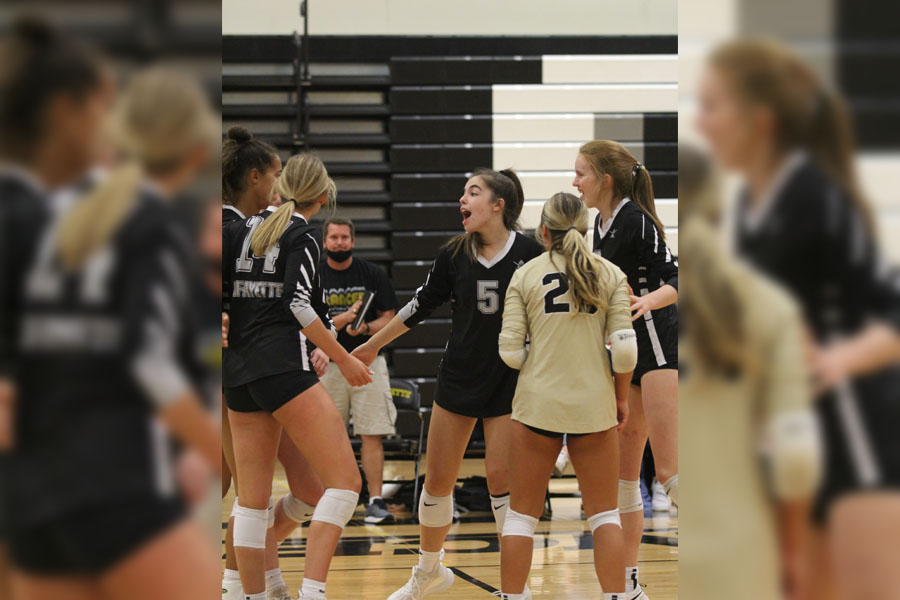 Senior Page Borgmeyer rallies her teammates during a game against St. Jospeh's Academy on Sept. 28. Borgmeyer and the team won that game, as well as all their games since, culminating in eleven consecutive victories.

The Lady Lancers defeated Edwardsville, 3-0 on Oct. 4. On Oct. 8, the Lancers played a close match against Kirkwood, coming up with a 2-1 victory. Sophomore Olivia Williams still leads the team on offense with 11 goals and seven assists. Their next game will be at Clayton High school at 4:30 p.m. on Oct. 11.

The Lancers were defeated at Ladue on Oct. 8 in a close game with a final score of 26-23. In the first quarter, sophomore Brayden Kladney hit a 32-yard field goal for three points. In the second quarter, senior Owen Butler scored a touchdown on a 3-yard run, and senior Alex Politte intercepted the ball from Ladue and ran 41 yards for his first touchdown of the year. Kladney succeeded in both extra point kicks. Butler scored again in the third quarter on a pass from senior Brandon Keen. Keen has passed for a total of 703 yards this season. The Lancers went for a 2-point conversion, but were unsuccessful. Their record stands at 2-5. The team has two more away games in the regular season, against Parkway Central on Oct. 14 and Ritenour on Oct. 22.

On Oct. 4, girls golf won the Rockwood Quad tournament, defeating Eureka, Marquette and Rockwood Summit. The girls will play in the Class 4 District 1 tournament on Oct. 11 at Paradise Valley Golf Course. The results of this tournament will determine which teams and individual golfers go to the State tournament.

The Lancers started out the week with a 1-0 win over Parkway West, which evened their record at 8-8. The one goal of the game was scored by sophomore Matheus Gasparino with an assist by junior Wes Jennings. Junior goalie Ryan Murphy kept West at bay, pulling out a shutout after six total shots. Later that week, the Lancers fell to Eureka 2-1, with the winning goal for Eureka being scored at the end of the game, after holding out a tie for the majority of the game. The one goal was scored by sophomore Aidan Nemnich off an assist by senior Kaden Karr. At the end of the week, they battled it out against Vianney but ultimately lost 4-2. The two goals for Lafayette were scored by Gasparino and Nemnich. With seven more regular season games of the year, the boys’ record sits at 8-10. This week, the Lancers will take on Hazelwood West on Oct. 11 at 4:30 p.m., Westminster on Oct. 12 at 4:30 p.m. and Timberland on Oct. 14 at 5 p.m.

Lafayette lost a close game to Oakville, 8-7 on Oct. 5 and lost again to Eureka on Oct. 6, by a score of 9-5. Freshman Abby Carr and junior Emma Durfee are finishing the season strong, each of them having 2 RBIs against the Wildcats. Senior Kaley Adzick leads the team with 22 RBIs followed by Durfee with 18. Carr leads the defense on the mound with 121 strikeouts and is second in the Conference. On Oct. 8, Lafayette bounced back with a landslide 6-0 victory against Seckman. Lafayette has its last regular season game Oct. 12 against Kirkwood at home at 4 p.m.

On Oct. 6, boys swimming and diving lost to Parkway Central, 112-84. Junior Brad Allison, one of the team captains, said, “I can’t say that it was a huge surprise. It was a pretty good team we were up against and going into it, we knew that we were going to have to do our best, and our best wasn’t good enough.” The team will compete in their next meet at home against Marquette on Oct.12.

The varsity girls tennis team dominated the courts in the MSHSAA Team Districts Oct. 4-6 at Francis Howell Central, beating St. Dominic, 5-2; Marquette, 5-2 and Francis Howell, 5-3, to become District Champions. The Lady Lancers play in the Team Sectionals Oct. 11-12, which will determine whether the team will advance to State the following week. Varsity player sophomore Sonali Mehta said the team is ready for Sectionals. “We have just been practicing a lot and during districts we’ve played some of our best tennis [matches], so we are optimistic for Sectionals,” she said.  The varsity members heading to Sectionals include seniors Thrisha Kosaraju and Ella Staehling,  junior Saanvi Gudreddi, sophomores Mehta and Kailyn Politte, Caroline Trost and freshman Madi Pfeiffer.

Girls volleyball played three matches in one week, extending their winning streak to 11 straight. In their first match of the week, the team shut out Rockwood Summit with a 3-0 score. Senior Amber Wilt finished the game with a total of four blocks. In another 3-0 victory, the Lancers beat Northwest Cedar Hill on Senior Night Oct. 6 in three straight 25-17, 25-10 and 25-6. Seniors Paige Borgmeyer, Liz Katz and Amber Wilt were honored before the game. In their final game of the week, the girls had to take it to four games against Marquette. They took an early lead winning the first two 25-23, 25-23 before losing one 23-25 to the Mustangs. But, the Lancers came back in the fourth and final game 25-22 to take the win. Sophomore Allison Risley leads the team in aces at the service line with 42 and defensively leads on digs with 191 followed closely by sophomore Alyssa Nelson with 185. Junior Audrey Savacool continues to be a threat with 134 points from the service line including 26 aces. Senior Caitlyn Little has posted 181 kills. In the final two regular season match-ups, the team takes on two of their biggest rivals, Borgia, on Oct. 12 at 6 p.m. and the Eureka Wildcats on Oct. 14 at 5:30 p.m.