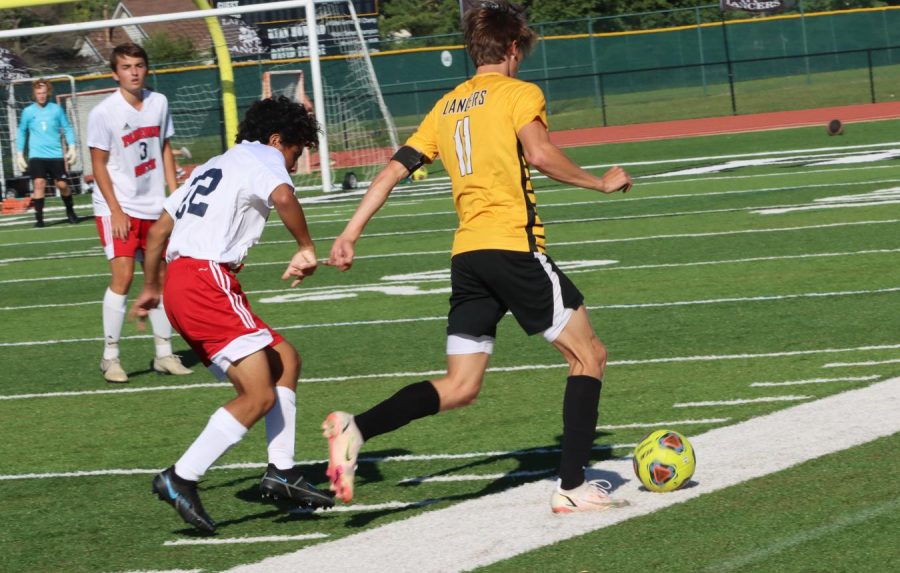 In a game against Parkway South on Sept. 8, Lafayette won 4-1. Senior Kaden Karr scored one of the four goals of the game in addition to sophomores Blake Klostermann, who scored the game winning goal, Matt Monschein and Daxton Shawke.

Boys Cross Country:
The Lancers placed fifth overall in the Forest Park Cross Country Festival’s Green Division on Sept. 11.  The team had two finishers in the top 10 with senior Nikolas Malek and junior Lukas Groenewald tying for third with times of 15:59.30. The next meet is the Festus Bowles Invitational, hosted by Festus High School on Sept. 18.

Girls Cross Country:
At the same meet, the Lady Lancers finished fourth overall, with junior Grace Tyson grabbing a second place individual finish with a time of 18:48.50. Tyson has had two top-three individual finishes in the first two meets of the season. The girls run next in the Festus Bowles Invitational on Sept. 18.

Field Hockey:
On Sept. 7, field hockey lost to Cor Jesu Academy, 2-0. The Lancers fell again on Sept. 10 to Visitation Academy, 4-2. Senior Ana McClellan and junior Lene Rossouw have both taken the lead on offense and are tied with seven goals each. Varsity plays an undefeated rival Villa Duchesne at home at 4:15 p.m. on Sept. 15.

Football:
Lafayette football faced Fox Senior High School on Sept. 10, earning their first victory of the season with a score of 23-12. Senior Jonathan Marshall scored his first touchdown of the season on a 63-yard run, and sophomore Zakaylen Jones scored two touchdowns in the victory adding to his total of four this season. “I feel that I wouldn’t have done it without my teammates. They push me to do things that I thought I couldn’t and make me believe that anything is possible. Coming into that game I knew that I had one job and that was to lead the team. I knew that I had to give it my all and not take a play off. The coaches also helped me learn that you never know when it’s your time to shine. You just have to get in there and do what you can,” Jones said. The Lancers enter the Battle of 109 against the Eureka Wildcats on the Eureka field Sept. 17.

Girls Golf:
In a close match with Ladue High School at the Ballwin Golf Course Sept. 8, the girls golf team won 182-185. Freshman Addy Surber and senior Caroline Boyette both shot a 40 for four over par which put them in a tie for the second lowest score on 9-holes. The following morning, Sept. 9, the girls took second at the Lindbergh Invitational at Links at Dardenne with a total score of 326. Senior Grace Stafford shot a 77  for the seventh lowest score in the invitational. Coming up, the girls face off Eureka at Forest Hills on Sept. 14 at 3:45 p.m.

Boys Soccer:
Boys soccer started off the week with a 4-0 loss to Webster Groves but bounced back with a 4-1 win over Parkway South. Senior captain Kaden Karr said during the Parkway South game, “I [thought] about keeping the game simple and [to] always be working. Also, to capitalize on all the scoring chances to help the team out.” Karr scored one of the four goals that game, and continues to lead the team in goals with five so far this season. “I hope my teammates notice the work rate I put into games and practices. I want to set a prime example for this year and the years to follow,” Karr said. The other three goals were scored by sophomores Blake Klostermann, Matt Monschein and Daxton Shawke. Assists for the game included two for junior Wes Jennings and one for Klostermann. “After the loss [to Webster Groves], we all realized the importance of unity and working together. We realized that the more we worked as a collective group, the more successful we can be,” Klostermann said. On Sept. 9, the Lancers lost to Francis Howell 3-2. The two goals were scored by Karr and senior John-Paul Keipp. This week, the Lancers will take on District rival Marquette at 6 p.m. on Sept. 14 and Lindbergh at 6 p.m. on Sept. 16.

Softball:
Lafayette’s varsity softball team beat Kirkwood 12-4 on Sept 9. The next home game will be against Parkway West Sept 21. Some young guns are making major contributions to the team as sophomore Lilian Ware leads the team in RBIs with eight and freshman pitcher Abby Carr has been strong on the mound with 62 strike outs. She is also leading the team with nine hits including three doubles and two triples. Senior Paige Halter also has two triples at bat.

Boys Swimming:
At the Marquette Relays on Sept. 11. the Lancers took third place overall. Senior Brandon Hui said, “The Marquette Relays are extremely fun. You get to do unique swim events for that day as well as meet people from other schools. I was able improve my times on my favorite events the 200 and 400 relay as well as hang out with some of my best friends.”
Second place finishes went to sophomore Sam Bolla, junior Masis Bagutidov and sophomore Caleb Warner in the 3×200 individual medley; Bolla, freshman Ryan Huang, senior Dylan Vorbeck and Warner in the 400 medley; Bagutidov,  sophomore James Thompson and Warner in the 3×100 breaststroke; and freshman Matteo Freire, Hui, sophomore Gregory Shao and senior Ethan Xu in the 400 free relay.
Third places finishes went to Ryan Domsalla, Hui, Thompson and Vorbeck  in the 200-freestyle relay; Freire, Thompson and Xu in the 900 progression; and Freire, Huang and  Shao in the 3×100 backstroke.
In the 3×100 butterfly relay Bagutidov, Bolla and Domsalla took fourth as did Domsalla, Shao, Vorbeck and Xu in the 200 medley relay.
In diving competition, senior Devon Gordon, freshman Adin Peper and freshman Jackson Tenny  placed third.

Girls Tennis:
The varsity girls tennis team is re-focusing its efforts in practice to work on some techniques they hope will pay off in matches after they had a tough week. “We’ve been working on our doubles strategy and the girls had some great results,” Coach Emily Pestka said. On Sept. 8 against St. Joseph’s Academy, the team was unfortunately overpowered, 9-0. The following day, they went against Marquette’s team on Lafayette’s courts and lost, 7-2 and then fell to Kirkwood 9-0 on Sept. 10. The girls will face Mary Institute Country Day School Sept. 13 and take part in the Parkway Central Tournament Sept. 14-15, as well as the Alton Robert Logan Memorial Invitational Tournament at Alton High School on Sept. 18. In regards to her matches this week, sophomore Caroline Trost said, “I feel excited about the upcoming games. I love playing new competitions and we have a lot of fun at matches,” Trost said.

Girls Volleyball:
This past week, girls volleyball had back-to-back matches at home where they defeated Oakville 3-2 on Sept. 8 and defeated Parkway West 3-0 the following night. The wins helped the team move to a 9-1 record on the season. Sophomore Allison Risley is leading the team in aces with six on the season. The team’s next home event is Sept 28 against St. Joseph’s Academy.