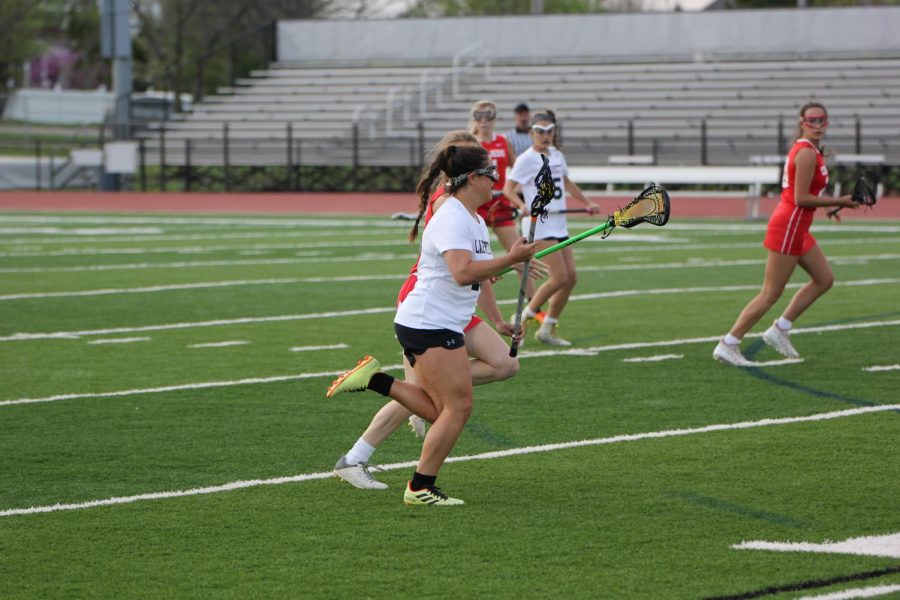 Senior Mia Simpson swings down the right side looking for an open teammate. Simpson scored two goals in the 13-9 victory over Cor Jesu on April 12.

Baseball: On April 13, the Lancers continued their diamond dominance beating Marquette, 12-2. Senior Luc Fladda pitched five innings and struck out 10 batters on the night. Three Lancers finished with home runs in that game with seniors Mitchel Hoffman, John Kramer and junior Andrew Alwell all hitting one out in that game. The next day though, Marquette came back and beat the Lancers, 8-0. It was the first time the team has been shut out all year, finishing with only three hits. In another shut out, the Lancers fell to SLUH 5-0 on April 15. This is the first time all season the Lancers have lost two in a row. On April 16, the Lancers regrouped and beat St. Dominic, 11-6. They had 12 total hits and Kramer led with three RBI’s. On April 17, the Lancers played a double header playing De Smet first and winning, 9-1. Senior Gavin Oswald pitched six innings, allowing only one earned run and finishing with 11 strikeouts. Later that day, the Lancers saw their fourth loss of the season falling to Westminster 8-7. After a busy week of baseball, the Lancers record stands at 14-4.

Boys Golf: After competing in the Bulldog Battle at Winghaven Country Club on April 13, the Lancers finished 10th out of 19. Out of the 118 players in the tournament, junior Trip Sanfelippo finished 12th, placing the highest out of any Lancers. On April 14, the Lancers beat Oakville 246-312. He finished as the match medalist shooting a 37, just one over par.

Boys Lacrosse: The boys lacrosse team continued to struggle falling to Rockwood Summit on April 13, 12-8 and CBC by a score of 17-4 on April 15. Junior Alex Politte leads the team with 10 goals and sophomore Cole Ohlmes follows with 7.

Girls Lacrosse: The Lady Lancers got their first win of the season on Senior Night, taking down Cor Jesu, 13-9 on April 12. Senior Mia Simpson finished with a pair of goals on the night and junior Ansley Hails led the team with four goals. On April 14, the Lady Lancers traveled to MICDS and lost 17-4.

Girls Soccer: Losing to St. Dominic 6-1 on April 12, the Lady Lancer experienced their first loss of the season after starting the year with a 7-0 streak. Freshman Allie Kinner scored the only goal of the day, bringing total to seven. The Lancers bounced back and beat Kirkwood 2-1 April 15. Juniors Rylee Howard and Allie Kinner had one goal each in the win as the team improved its record to 8-1.

Boys Volleyball: On April 13, the Lancers defeated the Oakville Tigers in a five-set match. They won both game two and game three by four points and then the final fifth game by two. On April 15, the Lancers shut out the Eureka Wildcats and completed the sweep beating them 3-0. In that game, the Lancers won the first game 25-16, the second 25-20, and the third 25-15.  The Lancers improved their record to 4-.3.

Water Polo: Water Polo saw its first win of the season April 12 when the Lancers John Burroughs in a close one, 13-12. The Lancers scored six of their 13 in the third quarter with junior Dylan Vorbeck putting in eight goals. On April 13, the team continued its winning efforts beating Eureka, 13-5.