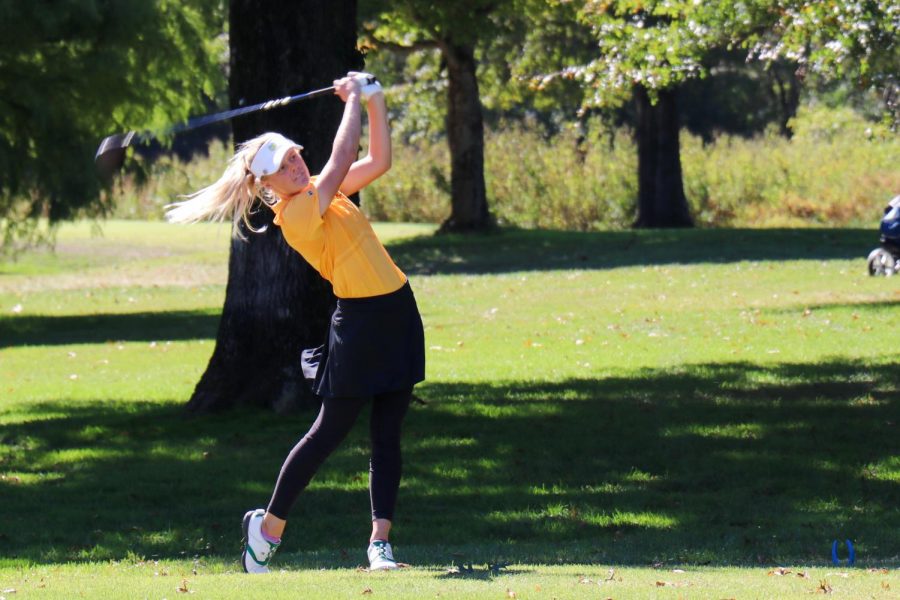 In a match, senior Brooke Biermann drives the golf ball up the course. Biermann placed second at the Missouri State High School Activities Association (MSHSAA) State tournament, shooting three under par in inclement conditions. Biermann's score, along with others, helped boost Lafayette to fifth place overall in the tournament.

The typical State golf tournament, held at the Dalhousie Golf Club in Cape Girardeau, is known to contain 18 holes, have beautiful views and the annoyance of the occasional breeze during two days of play. This year, instead of more ideal conditions, the course was pounded with rain, the grass and golf balls were slick and the wind was one of the greatest nuisances of the course.

Despite those impediments, which include the cancellation of the first day of play, the Lafayette Lancers girls golf team was able to place fifth overall, the first time they’ve been able to reach the top 10 since 2017.

Overall on the season, the Lancers have shown improvement despite the COVID-19 related challenges to the fall sports season. They’ve placed within the podium during most tournaments and even placed second in the Class Four District One Tournament, falling behind only by six strokes to Jackson High School.

Head Coach Katrina Clark said, “It was a good season. We were competitive in all events and beat some great teams. We even beat the Class 3 state champs [Rockwood Summit] in a match. It is amazing to see how far they have come. They really have matured on and off the golf course.”

Getting into the playoff mindset and State Tournament has always been the plan for the Lancers, and not even a little rain could stop that from happening. The team was able to play about 12 holes before the Missouri State High School Activities Association (MSHSAA) had to cancel the day.

“It impacted the event significantly. It pretty much poured the entire day Monday which made it a difficult and exhausting day,” Clark said. “Unfortunately, it was only an 18 hole tournament and was intended to be 36 holes.”

That didn’t stop senior Brooke Biermann from earning her fourth All-State medal at the tournament, placing second out of 72 athletes that qualified.

Biermann has been playing golf since she was eight years old, and has shown time and time again her capabilities of being a leader both on and off the course.

In her freshman year, Biermann placed fourth in State, then she placed second, in her junior year she placed first. Most recently she placed second and did so proudly despite the rain and difficulties golfers had to place.

“I always try to have a positive attitude heading into any golf tournament I play in. I knew the weather was going to be bad so I just told myself that I was going to have to be patient and take one shot at a time,” Biermann said.

Biemann shot a 70 on the course, three under par. The only player who outscored her was Notre Dame de Sion’s Megan Propeck, who shot a 67.

After her high school career, Biermann will continue on to play at Michigan State University. However, her legacy as a Lancer will live on.

“She is without a doubt one of the best golfers that have ever come through Lafayette. She is an outstanding player and most importantly one of the hardest working athletes I know. We are going to miss her leadership and her low scores. We have a lot of hard work to do to replace her. The juniors have learned from her and will step up and continue to do great things next year,” Clark said.

Biermann will look back at her times with Lafayette fondly, especially her senior year, and is excited for the future prospects of the team.

“I think this year’s high school season was so much fun, especially because our team did not know if we were going to get a season. It was filled with so many laughs and good times going to practice or a tournament with my team,” Biermann said. “I loved being on the LHS golf team all four years. I really love my coach too, she is such a great coach, mentor and player. My team this year was filled with amazing girls that I feel incredibly blessed to have met. The girls on the team all improved so much through the season, and it was so fun to watch.”