Audience, quality of talent contribute to success of event 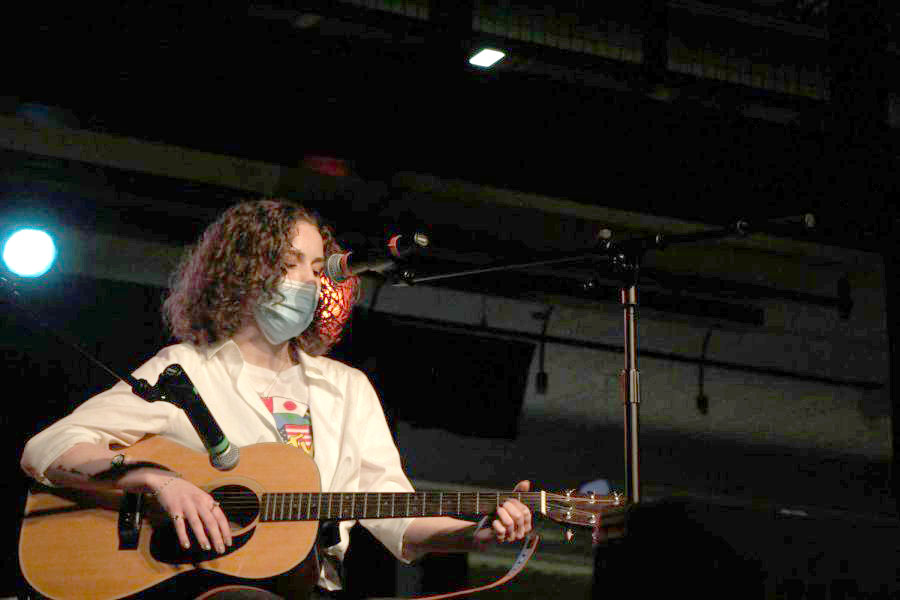 Later in the night, junior Kaitlyn Helm sings and plays her original song, "Find Me." In her first run of the song, Helm's microphone was off and she needed to start the song over. "I feel like the first time weirdly gave me a way to get comfortable in the space. I’m definitely someone who has struggled on stage with nerves in the past and on that second try I got to go in a lot more confident. I know what I’m doing, I know what things I want to tweak and I was one of the only people who could’ve heard it," Helm said.

Composed of individual and group projects, the variety show featured members of Lafayette Jam Bands, Guitar Ensemble, individuals and musical groups. Bolton was happy with how Coffee House went this year, especially since the event didn’t occur last year due to COVID-19 concerns.

Bolton attributes the success of the event to the preparation that went into it and the audience’s perception of the artists.

“I think it went really well. Overall, all the quality of performers was really good and the audience was very receptive,” Bolton said. “I think that also has to do with the fact that we haven’t had live entertainment in so long it’s nice to get it again. The audiences are so much more invested and for us, the performers, it’s such a great experience when you get that feedback when you’re onstage.”

Junior Kaitlyn Helm participated in Coffee House singing and playing guitar for her original song, Find Me. Despite her roots in theatre performance, she decided to branch out in order to discover more about music in general.

“I’m really interested in getting more into the music program and exploring it even more. [I go] to jam sessions and [love] meeting other artists who go here and make beautiful things. Theatre has definitely been a base for me and now I’m still sticking with that. I love it, it’s my core, but exploring all of the other talents here too has been so amazing,” Helm said.

Bolton was happy to provide students the opportunity to perform where they may not have done so elsewhere. She also believes that the intimate venue and audience were able to ease the stage fright of some performers.

“I think it’s a fun thing. There are so many of us that just like to play and we’re happy to do it for ourselves without an audience. There is a different chemistry and overall experience that occurs when another human is listening and responding to what you’re creating. It’s almost an addictive experience,” Bolton said. “I’ve had kids who were terrified to go on stage, and they talk themselves into a frenzy. Then they get on and they’re like ‘that is fun’ and then you can’t get them off the stage. It’s always a wonderful thing to see. They have been introduced to a new facet of music.”

Senior Ashleigh Howard attended the event for the first time to support her friend, senior Rachel Vishion, who performed as a vocalist in TNRB and other groups. She liked the event because she was better able to see students’ talent and hear some original pieces.

“I absolutely loved it, and would definitely pay $5 again,” Howard said. “My favorite part is the instrumentals. I love what people can do with instruments. [One of my favorite performances was] whoever played Habanero Hawaiian Rolls, it was creative and something I never heard before. It was original.”

For Helm, the event was able to connect her to the community and celebrate the originality of fellow students.

“I feel like here it’s more community. You know who’s here, you know there’s parents, grandparents and friends. It’s a comfortable environment and everybody is so supportive within the music,” Helm said. “There’s a beauty in having a comfortable little space with people you know mutually. It’s really different. As an audience member, there’s many good qualities on both ends.”