Living on the Veg

How I decided to become a vegetarian 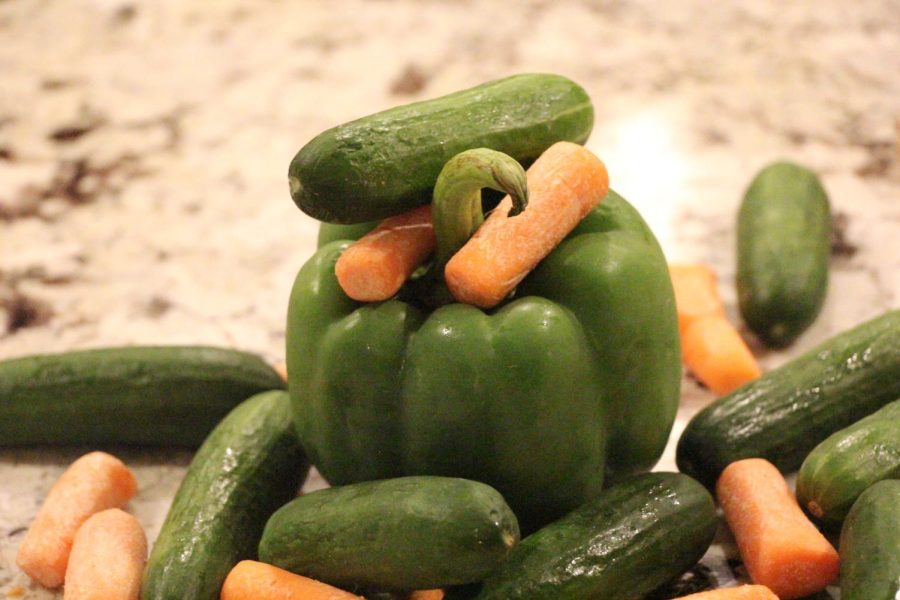 In lieu of meat, vegetables provide a majority of nutrients needed in a vegetarian diet. New plant-based burgers are starting to become popular, offering vegetarians an alternative to meat.

Why would someone choose to be a vegetarian?

Imagine being born, and instantly torn away from your mother. You are then locked away into a tiny cage, so small you can’t turn around, and as soon as you’re old enough, you’re forcibly impregnated. Every day of your long and hard pregnancy you are milked by humans. You then give birth to your child, who is torn away from you before you barely get a glimpse of them. You cry for days, but you won’t ever see your child again. You continue to be milked, despite the fact that this milk was meant for your calf. Once you no longer provide milk, the process repeats multiple times. Once you can no longer have children, you are put in a truck. This is the first and last time you will ever feel the sun on your back and fresh air in your lungs. You enter a slaughterhouse, where you’re paralyzed and killed.

This is what life is like for many unfairly treated livestock and also the reason why I am a vegetarian.

I understand that meat might be necessary as a source of nutrients and food in special cases. However, according to Healthline, humans can nutritionally and biologically live without meat. DNA evidence from over 300,000 years ago proves that humans have been continually adapting to their environments. We are no longer living in the Ice Age. We are living in the 21 century, in a first-world country.

In our country, there are so many other resources available, and there are so many vegetarian people who are perfectly healthy, so why do we continue to slaughter innocent animals? According to USA Today, the average meat-eater eats 7,000 animals in their lives. That’s 7,000 living things that one person is responsible for the death of. What for? Their enjoyment.

I became vegetarian as a fourth-grader, after realizing the way animals are treated for the amusement of humans. As a fourth-grader, I was able to recognize that these animals need to be advocated for. So why is it that the majority of Americans, including fully grown adults, can’t recognize this?

Being vegetarian would be the easiest fix to this problem, and it isn’t that hard of a thing to do if done correctly. Even if you’re someone who eats meat three times a day, seven days a week, vegetarianism is possible. I decided to become vegetarian overnight – which didn’t really work well. It took me about two weeks to actually get to the point where I was able to resist eating meat. Stopping eating meat abruptly, like I did, is probably not the best way to go about becoming a vegetarian, as it makes the process much more difficult. If someone is considering becoming vegetarian, the best way to transition is to ease into it and limit the amount of meat eaten daily.

However, I understand that not everyone can accommodate a vegetarian diet. I think the least people can do is to advocate and fight for fair livestock facilities. As people in the society we’re living in, it’s our responsibility to make sure we defend those that can’t defend themselves, but why does this only pertain to humans? It shouldn’t have to, and at the very least people should try their hardest to end inhumane factory farms. One easy way to do this is to pay attention to the source of the animal products you buy. By buying animal products from farms that treat their animals in the way I described, you are only supporting them. You can also try to eat more plant-based products, and spread awareness because this is a problem that needs to be fixed. If you can not become a vegetarian, the best you can do is limit the amount of meat you do eat and spread more awareness on this issue, so that our society has no choice but to face it.