Blog: Today I took a stand 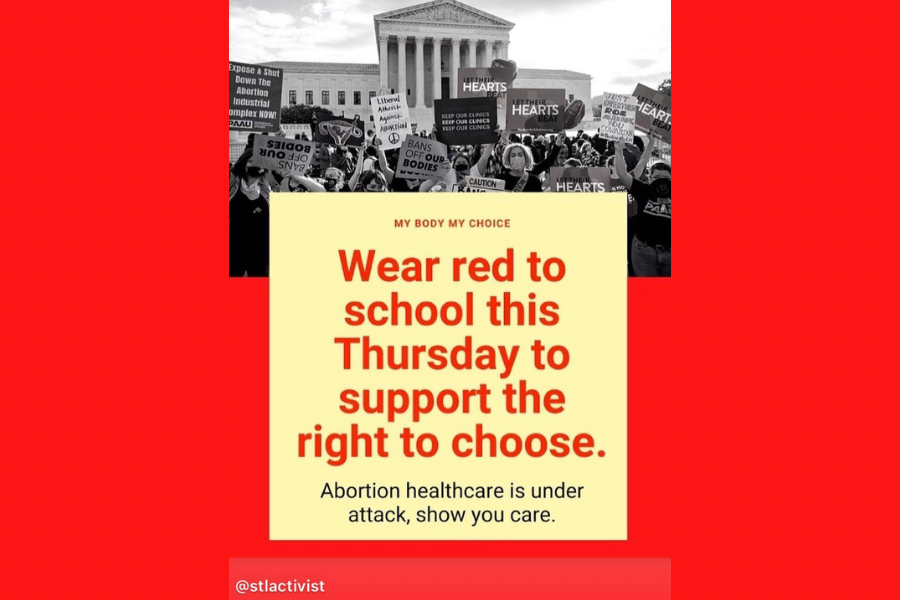 @stlactivists posted on Instagram to try and get students from different schools to wear red. According to the post, a student sent this to the account as part of something they were doing for their school.

I try not to get too involved in politics at school, but yesterday I saw this screenshot that said ‘wear red to school this Thursday to support the choice to choose [to have an abortion]’ in response to the recent Roe V. Wade news. It took me a while to decide since I wasn’t sure if anyone else was wearing red and that felt scary. I try not to draw too much attention to myself, but I kept seeing it on my friend’s Instagram and Snapchat stories. I had people text me and ask if I was going to wear red. So I did.

The first thing is that there’s a difference between a safer, legal abortion and a more dangerous, illegal abortion. By supporting the right to choose, I’m supporting having a safe way to get an abortion for whoever feels like they need one.

Personally, I hope I don’t ever have to have an abortion. If I have kids, I hope that I’ll have planned for them and that I’ll have a healthy pregnancy. Right now, I want to adopt. That’s how I see my future looking. Accidents happen though. I could end up not planning for that baby and I could be in a bad living situation. I could get pregnant and that pregnancy could be killing me. I could have gotten pregnant with a baby that was only predicted to live for a month.

There are so many what-ifs that I’ve considered, and that’s why I support the right to choose. There could be a reason that someone wouldn’t want to share or not a reason at all.

However, I can also respect that people view the birth of life differently. That’s fine — I just don’t think that’s a reason for other people to be restricted from doing something that they might feel they need. If someone decides to have an abortion, I personally believe that’s their choice; their body, their choice.

It’s like how consent is taught. ‘No means no’ is something I repeat over and over to my brothers because I want them to learn to respect me when I say no. In the same way that I would want them to respect other people when they say no. That’s how that works because I’m saying no to something that impacts me. But also, I want them to learn to be able to say yes and make their own decisions. They won’t have to deal with pregnancy when they get older, but this is still something I want my brothers to see everyone has the right to make certain decisions that could change their life.

In my mind, it’s the same way with abortion. It’s something that would impact my body, and if I want or need to have one, I deserve to have that choice. I believe that’s a choice everyone should have the right to make.

So today, I wore red to support my right—and the right of others—to choose.