I am a Jedi, like my father before me

‘Star Wars’ is more than a franchise in my family 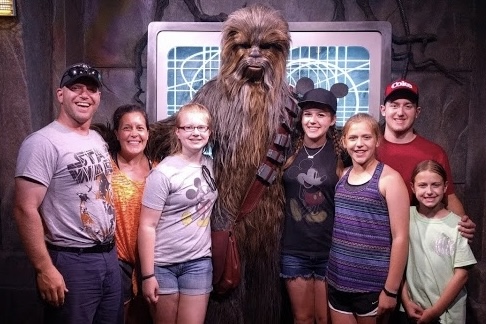 The summer before my freshman year, my family took a trip to Disney World in Orlando, Florida. My dad (far left) and I’s favorite stop was the Star Wars section of Universal Studios, where we met different Star Wars characters, including Chewbacca.

My dad’s fascination in the galaxy far, far away stretches back into his childhood with A New Hope, a film he watched so many times on VHS that his parents had to buy new tapes after he wore them out.

You would think that since Star Wars was such a huge part of my dad’s childhood, it naturally would be a big part of mine. I’m sure my dad was ecstatic to show me Star Wars for the first time, but I couldn’t have cared less.

He started me off the best way, with Episode IV: A New Hope. I sat in our basement with the lights off and the surround sound cued as my dad gave me a pep talk before watching the movie. As we watched, he periodically paused it to explain things to me that were confusing and warn me about potentially gory elements that made the film too scary for my two younger sisters to watch.

The next day, he asked me if I wanted to watch the next film, Episode V: The Empire Strikes Back and I answered with a resounding “no”.

My response to my dad that day is one of my biggest regrets, but I didn’t realize it until much later.

Fast forward about three years and I was scrolling through my laptop, trying to find something to watch when I came across the Star Wars collection. Thinking I should give it another shot, I clicked play. I watched A New Hope, The Empire Strikes Back and Return of the Jedi back-to-back that night. At some point during the third film, my dad walked into my room to check if I was asleep, as it was pretty late. I froze. I was for sure grounded and he would be taking my laptop away, it was a school night. He gave me a disappointed look and asked what I was doing.

“Return of the Jedi.”

He walked over to look at my screen and saw Princess Leia meeting the Ewoks. We stared at the screen, then each other until he broke the silence.

“You can finish this scene. Then go to bed.”

He closed my door and I watched the rest of the film.

The next day I approached him and asked if he would watch the rest of the films with me. Of course, he said yes.

The next few days, we carved out time to spend together watching all the Star Wars films, or when we weren’t watching them, we were talking about them.

Star Wars is deeply engrained in my family’s history. My dad’s side of the family is appalled if someone hasn’t seen the films. It’s a right of passage to watch them for the first time. And now, I’ll continue that legacy.

I’m leaving for college in a few months. I’ve been reflecting on the time I’ve spent with my family over the last eighteen years and my memories of bonding over Star Wars have always stuck out. So, even as I’m moving on to the next stage of my life, I’m not really leaving, I’m just growing. Something tells me going to college less than an hour from Star Wars: Galaxy’s Edge will allow my love and appreciation of Star Wars to also grow with me.

With that being said, happy Star Wars day.

And, of course, may the Force be with you.