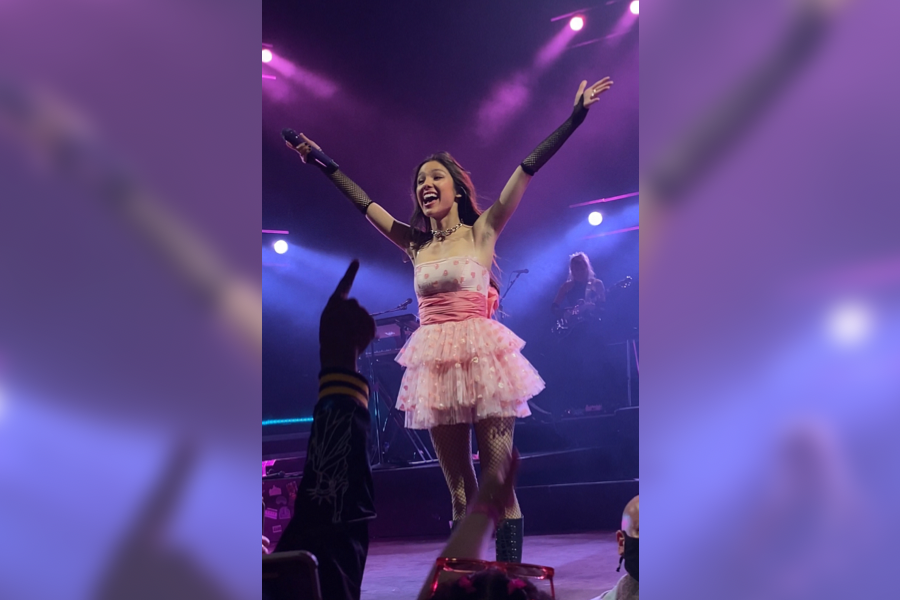 Olivia Rodrigo faces the stage during her performance at The Factory in Chesterfield on April 20.

On May 20, 2022, Fans lined up in the pouring rain and raging wind for a chance to see Olivia Rodrigo perform at The Factory in Chesterfield Valley. After arriving at 9 a.m., I quickly found out that the people who were at the very front, about 25-30 people before me, arrived at 3:30 a.m. To say the absolute least, the weather was brutal.

However, despite the downpour, the Sour Tour still sold out. There were no tickets left for the venue that holds 3,000 people. Unfortunately, since The Factory is a fairly new venue, the lack of organization and efficient manner in letting patrons in the door caused a significant amount of unrest in the crowd. Between being soaked to the bone, people who had been waiting since the early hours of the morning were being pushed down and passed by people who had only arrived a few minutes beforehand because of the way people were being let in.

After letting the first 1,000 people in the building, we still had to wait an hour for the auditorium doors to open, and once they did… it was a free for all. People were running to get to the front of the stage with 1,000 people trying to squeeze their way through the singular door that was opened. Many fans were pinned against walls by the mob of bodies, and some got separated from their groups.

Despite the chaos that ensued, the concert itself was a roaring success. Rodrigo’s opener, Gracie Abrams, brought the stage to life as she started the concert off with her hit song “Feels Like.” Throughout her set she interacted with the crowd, grabbing someone’s outstretched disposable camera and taking a photo with the crowd, spontaneously grabbing a phone and taking a video of herself singing on it. Abrams brought a high and clean energy that rippled through the space, and when she ended with her most popular song “I miss you, I’m sorry” the crowd was in a frenzy, anxious for Rodrigo to finally grace the stage, and grace the stage she did.

Rodrigo burst onto the stage with one of her loudest, and most upbeat songs she has released, Brutal. The crowd surged forward and stayed jam-packed and breathless until the lights came back on at the end of the night. The majority of the songs on Rodrigo’s list were slower and deeply emotional, the entire room was filled with grief-drenched voices singing along to a heartbreak we didn’t go through. Rodrigo impressed the audience with her strong clean voice whether she was jumping up and down, climbing the piano, running across the stage or simply standing with nothing more than her guitar.

There were, of course, things that could have made the event much stronger, and overall, more professional. The set for the Sour Tour felt like walking into the scene of a 90s prom episode of a sitcom. This created a very juvenile undertone to the whole experience. She later even came out with a prom-like dress on halfway through the show, perpetuating this idea.

However, despite the setbacks of the venue and the stage design, the concert was beautiful, and many people left with big and happy smiles on their faces from their experience. Also, Rodrigo did not only play her songs but also performed the songs “Complicated” by Avril Lavigne and “Seether” by Veruca salt. The beautiful thing about the songs that Rodrigo writes and the way she performed them, either ramped up with drums and electric guitar or in a more intimate way, the curtain closed with just her and her guitar. Rodrigo ended with her other strongest and most upbeat song she has released, “good 4 u,” leaving the crowd on a wild high after the emotional roller coaster of songs that were played.