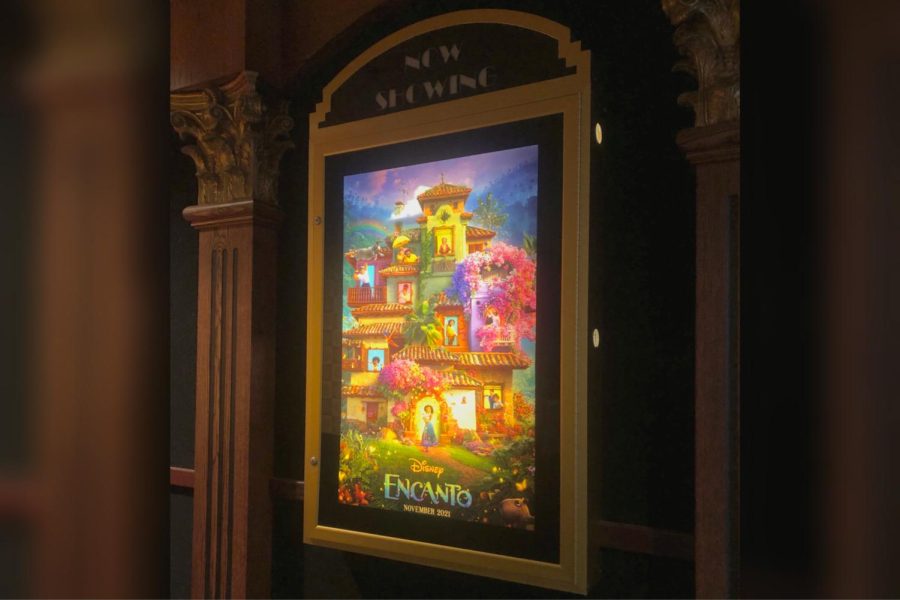 Encanto, released by Walt Disney Animation Studios, is showing in local theaters like Marcus Chesterfield Cinema and B&B Theaters. The movie will also be on Disney Plus on Dec. 24.

When Disney announced it would release a pixelated movie based in Colombia, I made it my priority to keep in touch with the updates of the movie. Finally, Coco wouldn’t be the only movie I look to for a personal connection, and Colombia’s reputation might be able to be rejuvenated after all. It’s important to acknowledge the difficulties directors Jared Bush and Byron Howard encountered when creating the movie, in addition to the pressures of Disney’s reputation. Not only did they have to appeal to a family-friendly audience, adding in characteristics to market well to both children and parents, who already have differing tastes, but they also had to make it as perfect as possible for the average Colombian watcher that expects to see themselves and their culture incorporated. The expectations were already set extremely high, even before the release date was announced. With so much pressure, the movie was very nicely portrayed and was able to accommodate the needs of a wide audience very well, another impressive movie that Disney can add to their list.

There was definitely a strong visual appeal, including many colors to appeal to children and the diverse races that are in the culture. Encanto also capsulated the location and cultural aspect of Colombia, so much so that my mother automatically realized where it was located and felt nostalgic. There were a lot of references in the movie that only Colombians would understand to the full extent, like the Bunelos, Arepas, Sombrero Vueltiao, clothing, dances and a lot more. This helped connect the movie to the culture, even if it only would be understood by people who are a part of it. On a more general note, the music was a great way to appeal to a vast variety of people, each song coming from a different genre and still incorporating the overall message of the movie. Though some songs are disconnected from the culture, it was a great idea to include so much variety to make sure every watcher identifies themselves with at least one song in the movie.

The overall message of the movie was the struggle of fitting into your role in a family, something that many Colombians experience because of how big a role family is in a Colombians life, but also is a broad enough topic to really connect with any audience member. I have dealt with the struggles of trying to be a ‘perfect daughter’ and trying to impress my own family as much as possible, and have also realized how much it can consume your life when your value is based on your family’s approval. The way Disney was able to explicitly voice this message, especially in a movie that is highly marketed towards children, is really valuable. Every Disney movie comes with a lesson: Frozen and the true love in the family, Tangled and the importance of taking risks and even their recent Raya and the Last Dragon and the judgment behind trust. However, Encanto covers a very serious topic that is prevalent in every household, especially in Hispanic households, which is the pressure people face to fit their role as a family member, allowing children around the world to understand that they are not the only ones who feel the pressure and that they are better off being who they want to be.

Even more admirable, Disney’s presentation of conflicts was not sugar-coated like in previous movies. The burning of the villages and the killing of the grandfather may not have been the focus of the movie, but it speaks very true to Colombia’s history and is able to educate children about the horrors that have occurred in Colombia, but the movie also paints a beautiful picture of magic and love that children will begin to associate with Colombia, a much-needed reboot of a reputation for the country. Though the magical aspect is obviously fictional, it will indefinitely demonstrate a positive side of Colombia to children and even to adults who have never grasped the beautiful sides of the country. Comparable to Pocahontas, Encanto tells a relatively true story without as much sugar-coating and is the right step to take to better Disney’s use of their platform.

Overall, the movie is a great lesson and a wholesome retelling of a general conflict faced by many people. Though it does not have the same climactic appeal as other Disney movies and is pretty predictable in the way it organizes its plot similar to most Disney movies, it’s just another Disney movie that represents its audience more and is more realistic for them to aspire to be. Instead of showing perfect princesses being saved by knights, it shows people like a strong woman, Luisa, who learns to feel weak, a perfect woman, Julieta, who wants to be imperfect and even a very conflicted son, Brunei, who assumed his family hated him but who learned he was actually loved. Each lesson fits into the main idea, but also will identify a lot of different people who feel the same way. It’s a great movie to watch with kids and an even better one to simply learn about a different country and a wholesome retelling of a story.