Opinion: The Colombian protests should be acknowledged 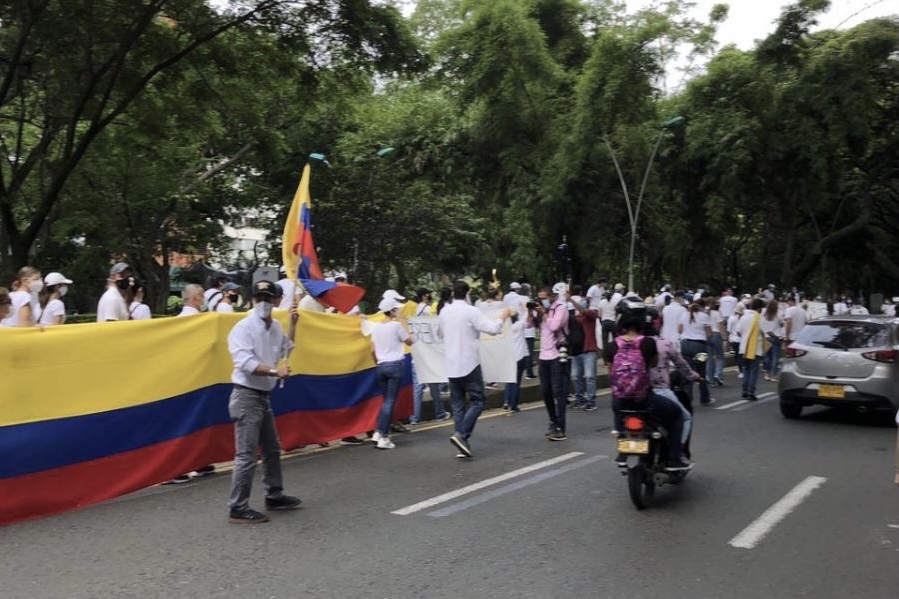 Peaceful protests that took place in one of Colombia's biggest cities, Cali. Cali has been the city with the most protests so far, along with other big cities like Bogota and Medellin.

I am an American citizen. I go to school here, I speak the language and the slang and I am a consumer of all American products. But when I go home, I am welcomed by my family’s culture as both of my parents are Colombian; their language, their food and their traditions have formed around the basics of my daily life. Right now, Colombia is undergoing a series of riots because of a recent tax plan that was being introduced by Colombian President Ivan Duque. The goal of the plan was to try and better the economic stability of the country, but fear arose in the working and middle class whose everyday groceries and utilities were being taxed. The city’s streets are being trashed, the gas stations and grocery stores are empty and my relatives are on a tightrope between the survival of the working class and the stability of their country, which is already in enough turmoil with rising COVID cases and economic collapse. Colombia is being attacked, and I can do nothing except write.

The people who are protesting have all the right to protest. COVID-19 has surged through the country, forcing the government to put the people on lockdown, a choice the working class are unable to afford. The protests began peacefully on April 28 but turned violent as alleged gang members and looters took advantage of the situation, as well as increased police force on protestors who were protesting illegally amidst the COVID-19 lockdown regulations. After the response of the people, Duque removed the tax proposal on May 2. However, following the death of 42 people and counting, the protests have only continued. Now, the people are wanting the riot police to be held accountable for the killings and are hoping for better reforms to be established, such as healthcare and a stronger access to education, to suit the needs of the poor. The protests against police brutality have turned into a continuation of protests that occurred in the fall of 2020, which also opposed excessive police force.

I feel for the protestors. The Economic Commission for Latin America and the Caribbean reported that 37.5% of Colombians lived below the poverty line at the end of 2020. An estimation with the 50 million people that live in Colombia, that’s approximately 18.8 million people living in poverty. What’s even worse is that this number is not including the number of people that have died recently because of COVID or other problems that wouldn’t have been an issue if they had more chances to make money.

Nonetheless, the protesters are also creating a more traumatic predicament for themselves– how will these people be able to afford food now that the streets have been compromised and the food trucks are unable to reach grocery stores? What is going to happen when there is another COVID outbreak in a country that is suffering enough already with a lack of vaccines and a death rate graph that appears to imitate a mountain range? How many bodies will have to pile up in the street before the situation is handled properly? It’s a dilemma that no one can control. Yet, ironically, it is under control by all of those involved; the protesters are adamant, the riot police are still armed and the national gangs cannot help but take advantage of the situation. As said by journalist Juan Iragorri on a spanish podcast, “It’s not easy to understand, even for the Colombians,” Iragorri said.

In the podcast, Iragorri explains that a large majority, 70% of the population, do not pay taxes for their work as they have ‘informal’ jobs, or jobs that are independent and not connected to a business of any sort. With these low income jobs, the people are not required to pay taxes to the government, leaving the government inaccessible to enough taxes and requiring them to tax necessities like food which only brings fear to the citizens that are already struggling to pay for their daily essentials. “To fix this would be very complicated, but I hope that we do, and hope that they can [reevaluate] the riot police,”  Iragorri said.

It is very important for other countries to be aware of the situation going on in Colombia. We see violent resistance to protests from all corners of the globe whether it’s here in the United States or the streets of Hong Kong. I feel it is my job to use my power as a student journalist to raise awareness by any means possible, even if it only reaches a small community of people. While I wish there was an easier way to resolve issues presented in any country, learning from other countries and making sure the problems are prevented is an important part of future success. I just wish Colombia wasn’t the epicenter of this crisis and those people’s lives, many of them being children, weren’t used as a learning tool.

The situation is complicated. My relatives are afraid, and the entire future of the country is wrapped around a hallway with tight corners, unknown where they will fall next. In the little time that I have spent in the country, I can only recognize it as a beautiful place. Of course, I haven’t been introduced to the ugly sides of the country just yet, but I am aware that its diverse culture and delicious food is overlooked by people who know otherwise. I have so much hope for the success of the country and, while it may seem impossible, I believe it will thrive and will become a part of human history that showcases perseverance and justice. I’m only an optimist who lives thousands of miles away in the comfort of a strong education and a daily buffet of food, but I still consider Colombia the home to my ancestors and to my many current family members, and Colombia is still under a siege of poverty and violence. I will stay optimistic until the day Colombia is no longer hungry for chance and I will continue to be hopeful until I can do more than just write.