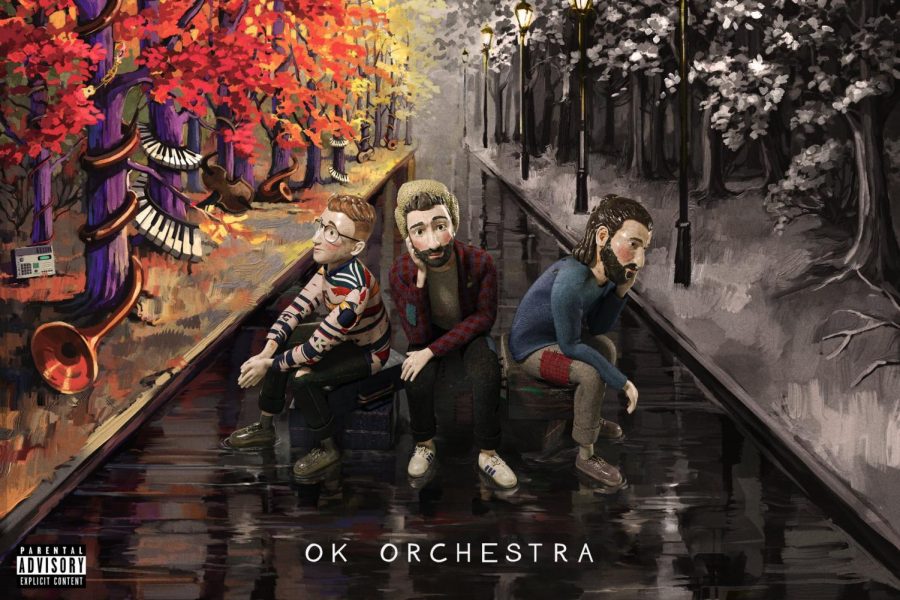 The three-brother band known as AJR dropped their fourth album, OK Orchestra, on March 26, two years after their previous release.

On Feb. 2, the band posted the first photo indicating there may be a new album coming. They teased their fans by captioning the photo with “And we’re back. BANG! 2/12” On Feb. 12, 2020 the first song was dropped.

On Aug. 23, 2020 AJR posted a photo of another song titled Bummerland surrounded by a ring of instruments on their social media, fueling fans further with the hope of a new album. On Aug. 31, the song dropped and hundreds of fans expressed their love.

The group announced they would drop one more song, My Play, during its live-streamed performance One Spectacular Night. Four days later, they released a video telling the world their new album, OK Orchestra would be released on March 26.

The group confessed on their Instagram that, “It’s been a year in the making, and after 12 emotionally cathartic months, it’s turned into possibly our favorite album we’ve ever made.”

Their passion for the album radiates from the 13 tracks they have created. AJR is known for its experimental style in creating its music. In their previous album, Neotheater, they recorded all the vocals for the album on a microphone from the 40s just to get a specific feeling from their songs. The group’s unique styles have drawn a large audience and its platform has grown significantly since its first release in 2015.

OK Orchestra is AJR’s most emotionally revealing album yet, each track is filled with gut-punching lyrics paired with their famous upbeat tunes. The first song of the album OK Overture is a genius blend of all the songs on the rest of the album, giving listeners a taste of what is coming for them in the coming tracks. The overture seamlessly bleeds one song to the next, creating a unique opportunity to listen to it after the rest of the songs have been played to discover the way that they mixed the tracks together.

Almost every track in this album mentions the struggle of knowing who you truly are and how to navigate the world while showing people who you are but not showing too much.

In the song 3 O’Clock Things the band comments on the absolutely exhausting nature of keeping everyone happy while being famous in order to keep people around and how that also bleeds into their own personal relationships.

The lyrics are undeniably the band speaking their truth saying things like “Sorry to bail, it’s already three o’clock. It’s too hard to tell if anything is real or not.” However, after commenting about how their parents always told them to stay out of politics and simply stay on the fence in order to keep more fans, they decided that the last line of the song would say “If you’re racist don’t come to my show.” In an interview with Zach Sang, Sang asked the group why they didn’t simply end the song after saying that line rather than end with the big instrumental. The lead singer Jack Met responded with the fact that they felt that it would be more impactful and commented,  “No that’s obvious we’re going to still party without you guys.”

AJR loves to have fun with the instruments that they implement in their albums. Perhaps the best example is their song World’s Smallest Violin where they perfectly transition between a violin, a trumpet, a piano, then back to a violin all on the same string of notes.

In each album they have released, AJR includes at least one slower, more vulnerable song. In OK Orchestra, the track is called The Trick. This song starts off with a haunting echoey melody with a ukulele background and builds with a bassline and finally swells into normal vocals and adds beautiful strings and overlapping vocals.

The song talks about the feeling that in order to be accepted or loved one has to lie to make themselves more interesting. This “trick” that they sing about is the sad reality that people are really trying to make and keep connections. It’s a beautiful song, filled with stunning vulnerable lyrics like “I’m not proud of this, but I’m not proud of the truth” and ends with the line “I love you, it’s true. But if you’re doubting this, if you’re doubting that I do, then oh my God, I’m screwed.”

It’s a heartbreaking testament to loving someone while not knowing how to show your true self to them, and the band executes its tender nature perfectly with the choir-like harmonies and chimes and swelling orchestra

In their song Ordinaryish People they start off the song sounding like a band coming onto a field. The song comments on the difficulty in pleasing everyone when you’re just trying to be yourself in lyrics like “the time last you had any fun was way back when you weren’t anyone” and they end the track with a punch saying “when you’re nobody then nobody minds”.

The final track on the album, Christmas in June, is an emotional song discussing the realities of tour life and how much one can miss out on. The group frames the song with lyrics like “You’re no longer gonna be the plan I miss. I won’t ever let you down, but just in case I do, can we do Christmas in June?” They go along talking about having to choose between a wedding and an album and end the song by commenting on missing the birth of a child and asking if they can just have the kid in June so that they don’t have to miss it.

All in all, OK Orchestra is a simultaneously upbeat and vulnerable album made for anyone who has felt the stress and strain of being a human. Even the cover art of this album was a stunning representation of mental health and the struggle of the human experience. Made with an incredible mix of beats, pianos, choirs, bands, and sounds, It’s an album that is so diverse that anyone can find a song for them whether they are looking for an upbeat song to dance to or an emotionally charged song that they can relate to.