Opinion: Poetry is not a thing of the past 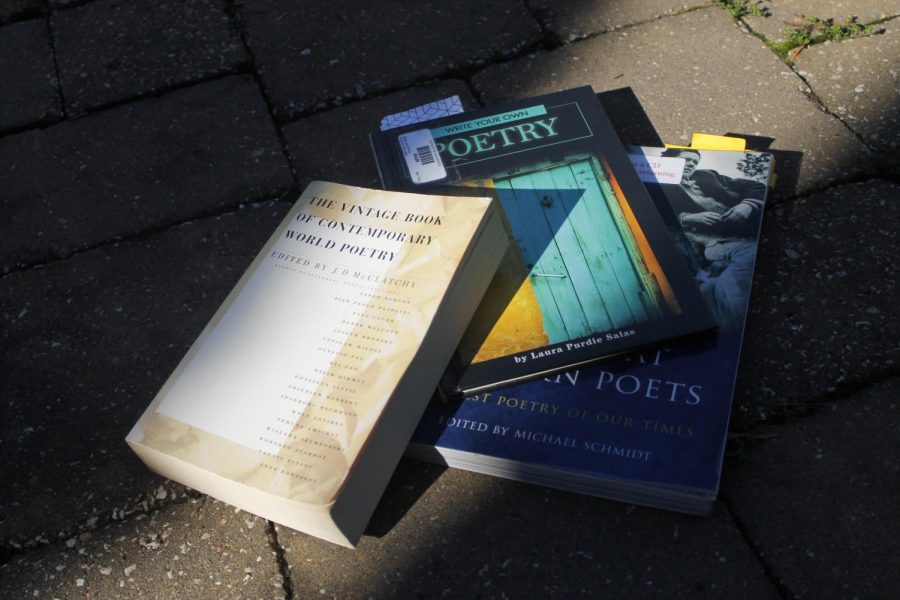 Books from the Library including: The Vintage Book of Contemporary World Poetry edited by J.D. McClatchy, Write Your Own Poetry by Laura Purdie Salas and The Great Modern Poets edited by Michael Schmidt.

Poetry is commonly attributed to historical periods such as The European Renaissance, The Enlightenment and the Golden Ages of many empires. It was our predecessor’s way of telling their stories and ideas in an artistic, far-fetched manner. However, for many poets, a poem is much more than metaphors and enjambment.

As said by the Editor of The Great Modern Poets Michael Schmidt, “Poems are wonderfully open, democratic spaces. They may ask us to read them several times before we understand the balances and contrasts, the lights and shadows, that they offer, but they are for the most part not deliberately obscure..No good poem makes common sense: the essence of a good poem is the uncommness of the sense it makes. It is a structuring of words in which many meanings, or meanings at many levels, are enacted. If we read poems as prose, they have very little to say.”

For me, poetry is the best way to write down thoughts and ideas without needing to explain myself or pay attention to what I’m saying, rather how I say it. It’s a coping mechanism for when I have emotions that I cannot put into words, so instead I say ideas that pop into my head to compromise for those lack of words.

My love for poetry started in 6th grade, when I unknowingly wrote my first poems. My English teacher would tell us to write a story using our vocabulary words every week, and I had gotten tired of the same ‘I watched my flamboyant bird in its cage’ cookie-cutter type sentence. So, I used the words to dramatize emotions I had fealt or observed and different symbols to represent certain feelings. My entire class would ask for me to read one every week, as they didn’t understand what message I was trying to convey but knew they had felt the emotions I was portraying. Their admiration and curiosity not only motivated me to continue, but also taught me to pride my work. I had to use full sentences, so it really was not as poetic as it could’ve been, but my love for creative writing and my new exaggerated voice bloomed after that class.

I learned what poetry was in 8th grade when our English teachers decided to create a beatnik performance, in reference to the 60s era, for the students. Most students recited songs in a poetic manner, but I decided to write my own. As it was one of my favorite poems I’ve ever written, I submitted it to the Beverly Hopkins Poetry Contest for High School Students, and lost.

I plan on continuing to enter contests, as I care less for the price and more for the feedback. As many writers are aware, the number one advice given by most highly skilled writers is to continue writing, which is something I’ve taken to heart.

Although I know each person has their own interests and might not be completely fascinated with poetry or writing in general, I do recommend people to give it a shot in their free time. It’s an efficient way to journal and can be thought of as a cryptic message that only you will fully understand. It can be related to building a puzzle, painting, and even simply observing with its wide-range of regulations and thought-provoking ideas. It unfortunately has died down over time and been misunderstood by people that have little knowledge of how poetry works. It can be assumed that all poems are as confusing as Shakespeare’s stories and are all related to the exaggerated poems that are read and analyzed in class. However, contrary to some beliefs, a poem doesn’t need a deep second meaning or intricate words in order to be a good poem. Poems, in my opinion, have 3 key details: an observation, a sense of feeling and a passionate poet.