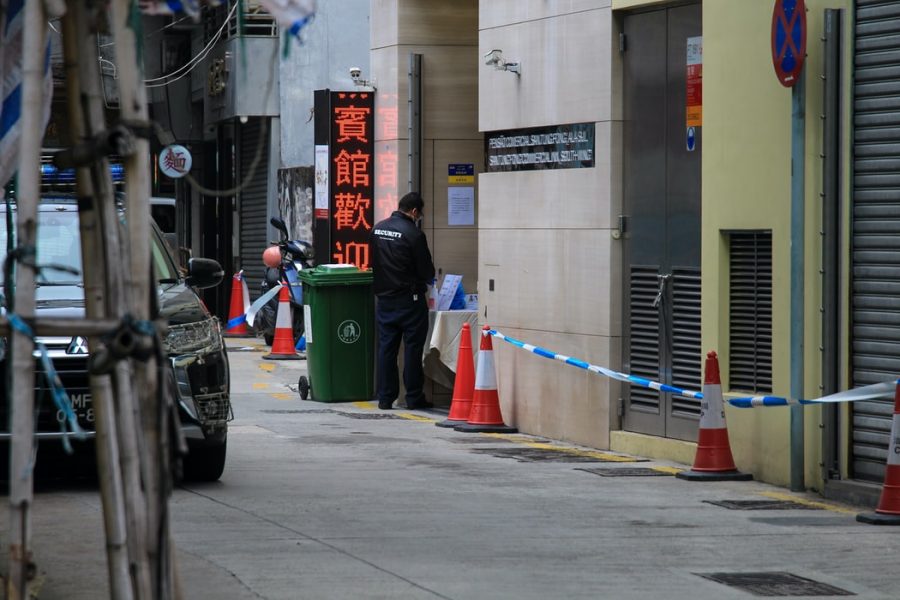 A security guard stands outside of a hotel in Macau, China that was converted into a quarantine area by the Chinese government. Photo labeled for reuse via Unsplash.

COVID-19 has been taking the world by storm. The pandemic originated from a wet market in Wuhan, China. The virus which causes COVID-19, SARS-CoV-2, is speculated to have originated in bats and spread to humans via another animal, such as a civet, which was the animal that spread SARS to humans in 2002.

One thing that has been notable during this pandemic is the response of governments around the world. There were isolated cases of the virus in early December of 2019, but infections in Wuhan started skyrocketing in late December. China reported cases of what they called “atypical pneumonia” to the World Health Organization (WHO) on Dec. 31, 2019. They later made the genetic data of the virus public.

Once the Chinese Center for Disease Control and Prevention (CCDCP) established a link between the virus and the wet market in Wuhan, the wet market was closed down by Chinese authorities. When cases started to skyrocket in China in late January, China placed the entire city of Wuhan under lockdown on Jan. 23, cutting out all transportation in and out of the city.

Ladies and gentlemen, if you don’t think this lockdown is much, think again. Wuhan has a population of 11 million people—that’s a little bigger than London. The lockdown was later extended to other parts of Hubei Province, China. Wuhan finally came out of lockdown on April 8.

Another industry that is dealing with the pandemic is cruise lines. Japan famously botched the handling of the coronavirus quarantine on board the Diamond Princess cruise ship. A man in his 80’s tested positive for the virus after leaving the ship in Hong Kong. When the ship returned to Yokohama, Japan, the ship was placed in a 14-day quarantine but ended up being a 34-day ordeal for passengers onboard. A word of advice for the Ministry of Health, Labour, and Welfare: If you keep people who have a highly infectious deasiese on a cruise ship, it’s going to spread fast. This virus spreads easily in tightly packed spaces and that’s what a cruise ship is.

Elsewhere in the world, handling of the coronavirus pandemic varies from country to country. Let’s compare the responses by South Korea, Singapore, and the United States.

In South Korea, the first case was reported on Jan. 20. Cases grew steadily in South Korea until there was a sudden increase, attributed to a churchgoer in the city of Daegu deemed “Patient 31.”

The South Korean government was originally criticized for letting the outbreak spread unchecked, but once South Korean health officials figured out what went wrong, they were able to “flatten the curve.” How did they do it? Many virologists agree that the key to stopping this virus is testing people, which, in my opinion, is one of the most important things you can do, along with self-isolation and contact tracing. But how is it that South Korea was able to flatten the curve so quickly?

Here’s my take on it. In 2015, South Korea experienced an outbreak of another type of coronavirus, known as MERS-CoV, which causes Middle Eastern Respiratory Syndrome (MERS). I think South Korea learned some lessons in dealing with outbreaks.

Another thing is that the private sector of the South Korean economy has shown a willingness to work with the government in times of crisis, which is what allowed the South Korean government to acquire a large amount of COVID-19 test kits. They also were able to test millions of people per day, which is critical to stopping this virus.

Let’s also take a look at the nation of Singapore. Singapore decided to test every single person who presented symptoms of influenza or pneumonia-like illnesses. Early in the pandemic, all the way at the beginning of January, they implemented temperature checks on passengers arriving from China.

Another thing they did was something known as contact tracing, which is vitally important in trying to stop a virus. Contact tracing is where you find out which people have been in close contact with the known virus carriers, which is important if you want to stop or reduce community transmission of the virus. However, new numbers show that cases are back on the rise in Singapore.

Meanwhile, the United States’ response to the pandemic has been the total opposite of South Korea’s and Singapore’s. President Trump downplayed the threat of the virus until the middle of March, even saying at a press briefing in February the virus should “go away in April with the heat.” He claimed multiple times that the virus was being contained in the US when it wasn’t. According to the New York Times, he was also told multiple times from 2017 that there was a threat of a pandemic, but he ignored every single one of those warnings.

The index case (the very first case) in the United States was a man who had returned from Wuhan to Washington state. From there, the virus wreaked havoc on Seattle and King County, Washington, especially at a nursing home. After Washington, the virus then spread to California, Illinois, Wisconsin, and New York. Illinois was significant because we saw the first instance of human-to-human transmission of the virus in Chicago, and New York had a “super-spreader” of the virus: a man who was infected but didn’t show early symptoms and rode the New York City subway and went to a religious gathering. About a month after the New York super-spreader was found, New York City became the epicenter of the virus in the US, with the city and state locking down. It has also now been shown that the first death from COVID-19 in the US did not happen in late February, but in early February.

I honestly believe the U.S. response to the virus has been a total and complete disaster. The Centers for Disease Control and Prevention (CDC) launched test kits in early February but had to recall them because they were faulty. It also seemed that upper class citizens were able to get a hold of a test much easier than the average American.

If the U.S. government wanted to make the virus response a success, then what should have been done is this:

The first case only came in late January. We had at least four weeks to prepare, but we didn’t. We should have been doing contact tracing from the get-go, not wait for the 30-case benchmark.

We spent months downplaying the threat of the virus. As a result, our hospitals don’t have enough personal protective equipment (PPE) for all the doctors, nurses, and paramedics on the front lines of this pandemic. We’re also running low on N95 respirator masks and ventilators, as well as plain surgical masks. The United States sent a whole lot of PPE to China when it was desperately needed back here.

You would also have to consider the economical aspects, and it seems that the government is doing somewhat well in that department.

And finally, the president, state governments, and the Department of Health and Human Services (HHS) should not be contradicting each other. As it is right now, the president says one thing, the states say another thing and HHS says a whole different thing. The government response should be more coordinated, and we should all be listening to someone like Dr. Anthony Fauci, head of the National Institute of Allergy and Infectious Diseases (NIAID). He knows this stuff. It’s right up his alley.

Bottom line: the government should plan for something like this—not make a plan of action while a pandemic is playing out.