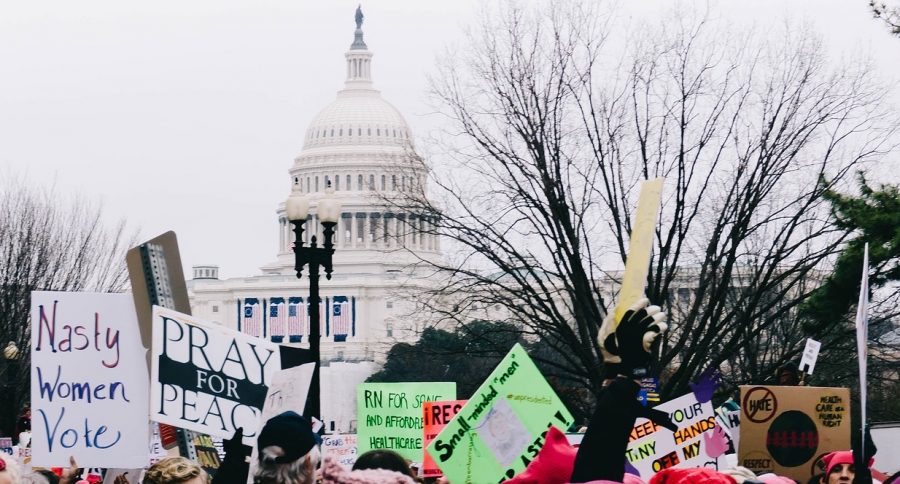 The Women's March on Jan. 21, 2017 encouraged millions to march in protest of President Trump's inauguration. A photo of the event on display at Washington, D.C.'s National Archives blurred out words like "Trump." Photo by StockSnap, licensed for reuse via Pixabay.

At Washington, D.C.’s National Archives, home to the Constitution and the Declaration of Independence and self-described as “the nation’s record keeper,” historical revisionism is happening in real time.

An exhibit showcasing the 2017 Women’s March after President Donald Trump’s inauguration intentionally blurred out words on protestors’ signs, including the word “Trump,” from a photo of the event. “As a non-partisan, non-political federal agency, we blurred references to the President’s name on some posters, so as not to engage in current political controversy,” a spokesperson told the Washington Post.

If I were to write, “during the French Revolution, King Louis XVI was guillotined,” no one in their right mind would accuse me of being an insurgent, bloodthirsty Jacobin. But if I were to adamantly alter certain details of the event, maybe insisting the king’s execution wasn’t really about him at all, then one might rightly suspect me of being a bit too cozy with the ancien régime.

So it goes with the National Archives. By voluntarily obscuring the facts of what happened in the Women’s March, they are injecting their own opinions into the matter and violating their responsibility as an objective guardian of the truth.

A protest of millions is not neutral. Those people marched in opposition to Trump’s inauguration. To feign their impartiality by editing out the source of their grievance is historical malpractice.

Thankfully, the National Archives has removed the offending photograph and said it will “start a thorough review of our exhibit policies and procedures so that this does not happen again.”

But the whole circumstance raises an important question: who exactly was this supposed to protect?

Editing a photograph does not happen at random. Somewhere along the line of producing this display, someone made the deliberate choice to censor, and the modified photo that resulted made it through whatever vetting process the National Archives has.

Except, the Women’s March was well-documented. And besides, every political movement has its opponents. In fact, the exhibit itself was originally juxtaposed with a similar photo depicting a suffrage march in 1913. So why did the National Archives go through the effort of concealing what really happened?

We’ll never know for certain, but here’s one potential answer: as the federal government’s authority on history, the National Archives sought to portray this administration through a more positive lens. As a result, it made the Soviet-style decision of eliminating dissenting thought from the photograph. If this is truly the case, as the evidence seems to suggest, then the National Archives has sacrificed probity for partisanship.

In the end, the National Archives made the right decision by taking down the display. However, we need to be able to expect more from the protector of the past.