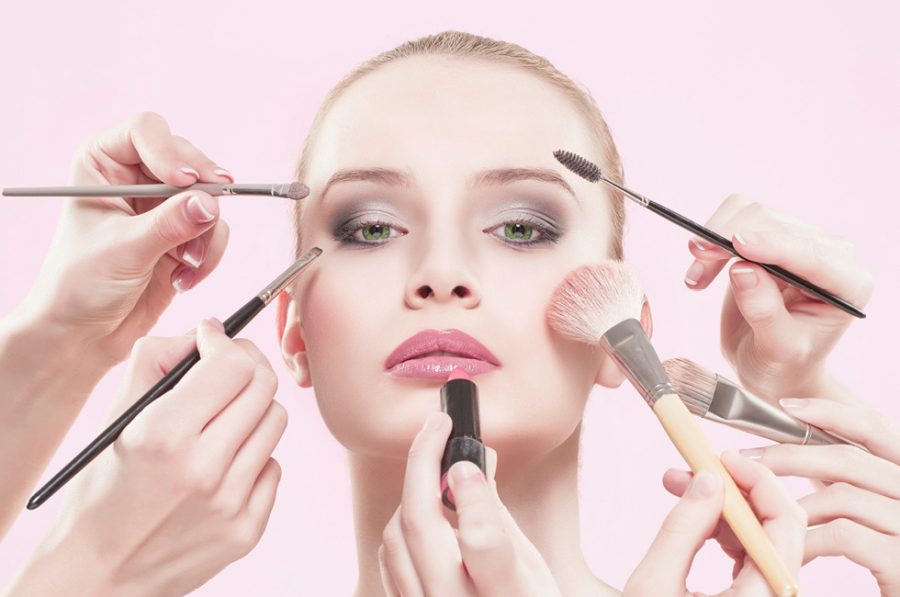 If you scroll through Instagram, you’re bound to see a makeup video at one point or another. Full of luscious lips and winged eyeliner, these self-proclaimed “beauty gurus” generally have a large following of fans who want to be just like them. Unfortunately, these people and the industry itself has the potential to be dangerous.

Don’t get me wrong; makeup, if used correctly, can be a good thing. The main purpose of cosmetics is to enhance your natural beauty. Even if you want to go full out with a dark smokey eye and neon lipstick, this is just another form of expression and working with what you were born with.

Unfortunately, the modern makeup industry can be brainwashing. It is known for pushing certain standards onto the public and causing insecurities. Models are shown with perfectly chiseled cheekbones, pouty lips, light skin and articulately arched eyebrows. People ask themselves, “Why can’t I look like that? Why can’t I be like them?”

These models are airbrushed and painted to perfection, making them almost non-human. It’s almost impossible to look like these models naturally, which means causing insecurity for the public is negative. They push on potential customers that their products will make you look as perfect as the model, which is rarely accurate.

“Research shows that around 80% of eighteen-year-old’s aren’t happy with themselves,” said Kate Fox, author of  Mirror, Mirror; a Summary of Research Findings on Body Image.

Teens who are already not confident with their appearance see these models and typically want to look like them.

“To compensate for this general insecurity, cosmetics have become one of the easiest ways to live up to the predetermined ideals concerning beauty,” said Ann Marie Britton, author of  The Beauty Industry’s Influence on Women in Society.

Makeup can be used to enhance one’s appearance, but can have a cost. Using makeup to change your looks can pay a toll on one’s mental health and be a way to look like the models we see in the media.

Not only is the mental health of the public at risk, but so is the physical health.

In 2015, the “Kylie Jenner Challenge” became a trend. Jenner is known for her full lips and her aesthetic, which caught the eye of many fans. This challenge entailed using suction from a cup or another object to make one’s lips appear larger. This led to many people bruising around their mouth due to the suction and had the potential for even more harmful and permanent consequences. Celebrities encouraging this behavior is not safe and is pushing a certain ideal on willing minds.

Many gurus, including James Charles, Jeffree Star and others have had controversy because of their actions.

Star has possessed a large social media following for years, beginning with MySpace and his retired music career. He has been seen in videos throwing around racial slurs and derogatory terms and has gone as far as to joke about throwing battery acid at a black woman’s face to “lighten her skin tone.” People have chosen to look past this and make excuses for him purely because they support his makeup brand and social media presence. Idolizing a person who acts in such a manner and knowingly has many people who follow and look up to him is troubling. Star has since apologized for his actions, but it still happened and is not something easily forgotten.

The issue with people dismissing his actions is that they are only doing so because of his status. People like him for his funny and energetic personality, as well as his cosmetics brand, so they’ll ignore this darker side of him as to not disturb his veil of perfection that is held in front of their eyes.