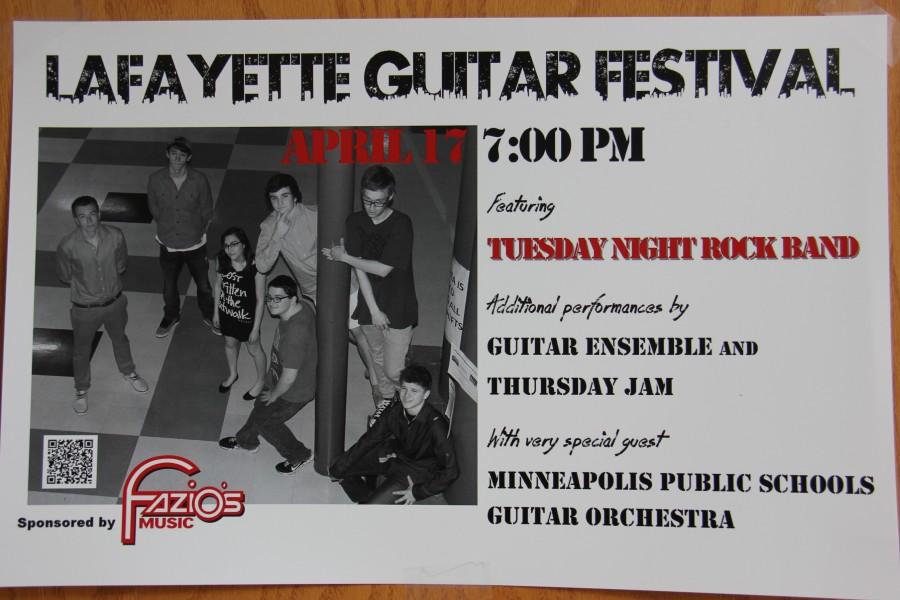 On April 17, music groups will come together for the Lafayette Guitar Festival. The festival will include performances by Lafayette’s own Tuesday Night Rock Band, Thursday Jam bands and Guitar Ensemble as well as a guest appearance by the Minneapolis Public School Guitar Orchestra.

The free music festival serves as an end of year celebration for each of the guitar groups led by Traci Bolton, music teacher.

“It’s the culmination concert of all the extracurricular guitar groups we have. This will be the first time the Thursday Jam bands get to do something out in public and its always a treat to get to watch the Tuesday Night guys,” Bolton said.

In addition to the Lafayette bands, the Minneapolis Public School Orchestra will also participate, adding in their own ensemble and two rock bands.

“We are going to do some combined stuff with our ensemble and their’s together. It will be cool to see us all come together. At one point there will be at least 38 guitars together on the stage, so I think that is going to be a lot of fun,” Bolton said.

Jack Brickey, junior, is a bassist for the Tuesday Night Rock Band.

“Everyone should come in and see it. It will be fun time to see all of the people who love music at Lafayette to kind of show off what they can do and hear more modern music that you wouldn’t hear in a normal orchestra concert,” Brickey said.

The concert will be on April 17 and will have no admission charge. The event begins at 7 p.m.