After tumultuous election, most agree they are ready to move country forward 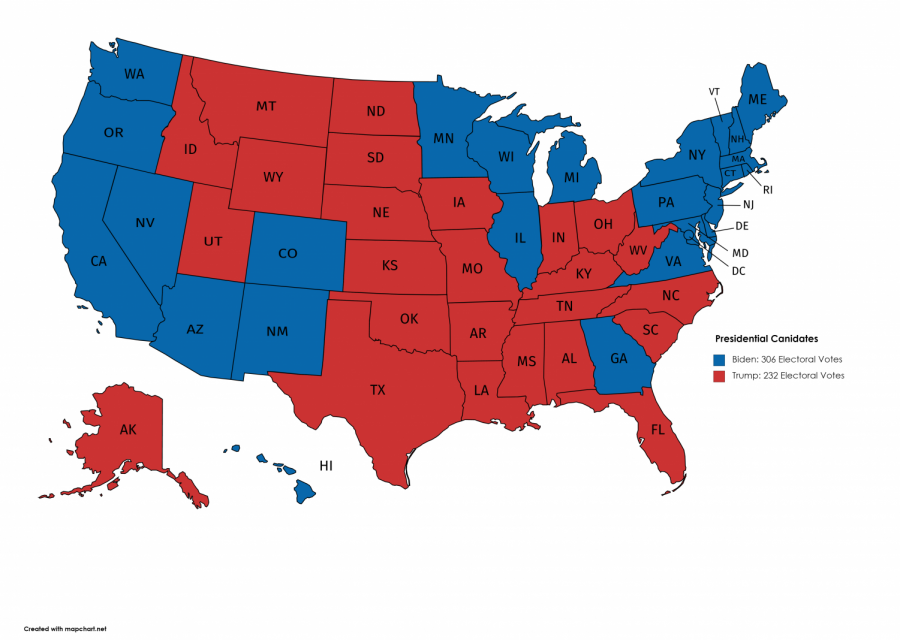 The 2020 Presidential election between incumbent President Donald Trump and former Vice President Joe Biden proved to be a very defining moment in American history. Taking place in the middle of a pandemic, mail-in voting became a popular option for many, causing a delay in vote counting and a lot of controversies. In addition, the race polarized the country into two very opposite groups and led to an unprecedented voter turnout.

In the end, the race was called for Joe Biden by every major organization, with the electoral vote looking like it will breakdown to 306-232. CNN also lists the popular vote results as 80,026,721 (51%) for Biden and 73,890, 295 (47.1%) for Trump, with both candidates achieving the highest vote total ever for a presidential candidate in either party.

The electoral college will meet on Dec. 14 to officially cast its ballots. In the meantime, the Trump Administration has yet to officially concede the election. His legal team is currently pursuing legal challenges in several key states, aiming to flip them and overturn the election results.

Despite the circumstances surrounding the election of 2020, the one thing most people are agreeing on is they are glad this particular roller-coaster election is over and the country is on the path to moving forward, even if they are uncertain about what the future holds.

Waiting for a winner to be called for several days was predicted by experts, and students also knew they would have to wait to see who the winner would eventually be and if their choice would come out victorious.

Junior Sarah Nassar said, “I thought the election was pretty predictable in terms of having to wait for a winner to be declared. I was honestly not sure if [Biden] would be the victor. Based on everything I’ve observed online and in our community, I predicted it was going to be a close race and that’s how it turned out. I am glad Biden was victorious though.”

“I believe in society today, we are so used to getting all of our information quickly. We expect results when we know there’s an election, and we expect that there should be a winner that evening, even though many times that may not be the case. When we are not given an immediate answer, confusion and frustration can set in,” Yeargain said. “It still ends up coming down to the official electoral college vote in December. It is unlikely to change the projected outcome, but the election is still not officially decided until the electors have cast their ballots. In our history, we have seen the presidential results called into question a couple different times. I believe once we get to January, if everything continues to hold true, we will see a begrudging transition of power. It won’t be 100% smooth, but I do believe we will see a transition and acceptance of the results by January.”

David Kimball is a political science professor at the University of Missouri-St. Louis and said one silver lining in this election cycle was the record voter participation, however, there were definitely some disadvantages as well.

“Having a really polarized and divided nation has a lot of downsides, but one advantage is that more people are interested in politics and thus, more likely to turn out and vote,” Kimball said.

The 2020 election was marked by record voter turnout. Data from Statista shows that 66.5% of the eligible voting population cast a ballot in the 2020 general election. In Missouri, 66.3% of those eligible voted. In 2016, voter turnout was 59.2% nationwide.

“I think voter turnout among the younger people is great. We get a more accurate reading of the country and how people feel about who’s leading it,” Kennon said.

While Trump won Missouri voters overall, Biden had a strong showing among youth voters in Missouri, gaining 50% of the youth vote compared to Trump’s 46%.

Some students expressed they were not surprised by the Biden victory.

Junior Arjun Suresh said, “I knew America was changing and moving away from Trump’s ideals so Biden winning was not the biggest surprise.”

Other students expected the election to go differently but said they are ready to move on either way.

Junior Nathan Rothweiler said,  “I supported Trump because he helped the economy and boosted jobs in America until the coronavirus hit and I don’t know how anyone could have handled it. I don’t really care much about Biden winning, since right now I’m just in high school, and I’m not really in the real world yet, so his presidency won’t affect me that much.”

Freshman Jayden Kennington said,  “I am a strong Trump supporter. I do think the election seemed a little fishy, but I will support Biden if he becomes president. Either way, Americans will move on.”

The students who were happy with the results said it was because of their agreement with Biden’s stance on certain policies.

Junior Elena Mendoza said, “I support the Democratic Party and what Joe Biden supports and his stances on key issues, like expanding free college, undoing Trump’s immigration policies and supporting the global environment. Also, Biden showed support to all races and various communities.”

Junior Snehal Maddi said, “Although neither candidate was ‘perfect’, I think Biden was definitely the better option of the two. First and foremost: climate change is a huge issue the Trump administration has completely disregarded during his four years in office, whereas Biden has said that he wants to rejoin the Paris Climate Accord. Social issues/civil rights are huge to me; I’m extremely pro-choice and think abortion should be legal. Biden will do way more for minority rights, such as the LGBTQ+ community than Trump ever did. I also support his tax plan. That being said, I’m obviously very happy with the results and I’m hopeful for our country.”

Regardless of what side of politics people are on, a big concern for many is whether or not the country will be able to come together now that the election is over. Biden has talked about the importance of healing the divide and local groups have also called for people to try to find some common ground to move forward in order to address the challenges facing the country.

Sophomore Hunter Song said, “Honestly, in my opinion, based on what I saw on social media and the media, everyone was freaking out way too much about this election. It felt like the election was being portrayed as if it would completely change the nation forever, and honestly, while it is possible that could happen, I don’t think this election will have a major effect on daily life, besides higher taxes, increased crime, and the shrinkage of the middle class, but I do not think this election will destroy America.”

The bumpy transition and legal challenges to the election results have some political experts concerned about its overall impact and how it impacts the country overall.

“Will [Trump not conceding] effect who becomes president on Jan. 20? No. [President Trump] has been consistently losing these legal challenges, some states are still counting absentee ballots or provisional ballots, so the vote count continues. In the states that have recounts, the recount might shift the results by 100 or 200 votes, not by the number the President would need. With President Trump not conceding, it presents a challenge for the incoming administration to deal with issues, such as COVID-19,” Kimball said.