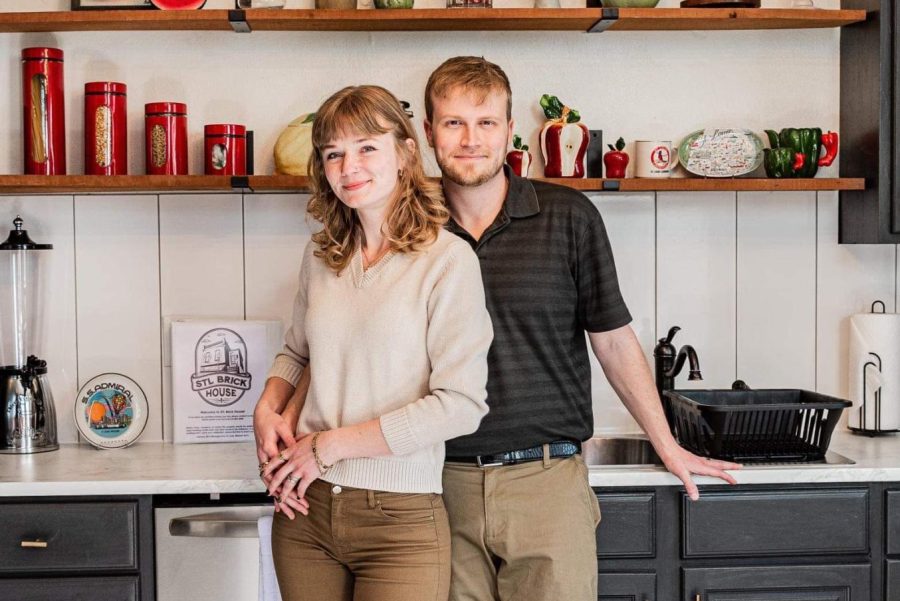 To promote their business, Airbnb owners Class of 2013 graduate Brian McKanna (right) and his wife Kat McKanna (left) pose for promotional photos. Taken on March 11, these photos featured the remodeled kitchen and other parts of the STL Brick House Airbnb.

Class of 2013 graduate Brian McKanna was able to follow his entrepreneurial dreams and find numerous ways to channel his passions. He started out with a business repairing arcade machines.

When he was hired to fix arcade machines at Six Flags St. Louis, Brian met his wife, Kat McKanna, who was working as an attendant for the machines. They both began working corporate jobs out of college.

“I started that summer, 2015, and then a couple of months into the work summer, they brought Brian on as the arcade technician. We became pretty good friends just from working together, and I think he impressed me with a lot of his skills with the arcade,” Kat said.

While Kat moved out of the corporate world and currently works from home, reselling vintage clothes on Depop, Brian still works as a sales associate for several large plumbing manufacturers. He sold his original arcade business and now runs two Airbnbs with Kat.

“With the pandemic, a lot of businesses had to close, turn off their video game machines and arcades. So I decided to sell the business at that point,” Brian said. “Instead of starting a business again, my wife and I are actually working on our third Airbnb. We’re going to have a house that has a full retro arcade included, so that’s kind of how I’m going to redirect my passion for arcades.”

The first Airbnb the McKanna’s opened is called Twin River Cottage, which is located in Eureka. After seeing how that one worked, they decided to open a second in the St. Louis City area which they named STL Brick House. Since they would both like to have more time to focus on their passions, Brian sees them opening more Airbnbs in the future.

“I think we’d like to have a couple [Airbnbs]. We’re ambitious, we definitely have some big goals and we have a lot of different projects going on,” Brian said.

With the Airbnbs, Brian tends to handle the management while Kat handles more of the renovations and thrifting to find decorations and other things needed to complete the Airbnb.

“It’s a very good blend of skills with him having more of the business running side and me having more of the skill sets with renovations and whatnot,” Kat said. “I like to do a lot of the little remodeling type aspects and so [Brian’s] on the properties oftentimes, but he’s kind of doing more of the online stuff so he’s there for moral support,”

Although setting up the Airbnb’s takes time and hard work, the results are paying off for Brian in this latest entrepreneurial journey.

“I’ve always been so entrepreneurial and I’ve never really had a business that was successful. Now that we’re seeing success with our Airbnb, I’m really enjoying it. It’s been great,” Brian said.