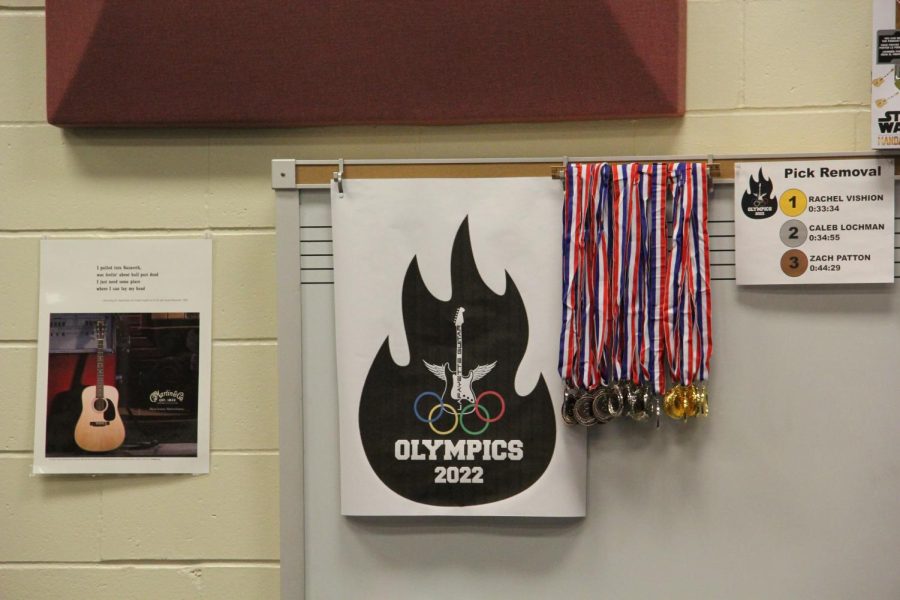 The poster for Guitar Olympics hangs over the whiteboard in the guitar teacher Traci Bolton's classroom. Although this was the first year of the event, Bolton said the idea started last year. "We were stacking our footrests, and we thought we should make it a competition. Then we thought, what else could we do? We could do cable wrapping and getting picks out of the guitar. We started thinking about all the things we do in class, so we started making events," Bolton said.

This year, the Fine Arts Teacher Traci Bolton decided to organize a special event for her Guitar Ensemble class. Since the Winter Olympics occurred in February, Bolton decided to call the event Guitar Olympics. Just like the actual Olympics, there are different categories students could compete in to win a bronze, silver or gold medal.  Some competitions were based on guitar skills, like melody reading, and others were based on more practical skills used in the classroom like removing a guitar pick that has fallen into a guitar or throwing paper into the trash can. After all of the categories were completed, there was an awarding ceremony.

The event started on Feb. 7 and lasted until March 1. After the success of it, Bolton wants to make the competition annual.

“I think we’re going to keep it, just because they have enough skills to do different events, but it’s going to be an every year thing,” she said. “Since next year is not an Olympic year, perhaps we’ll call it World Championships or something. I think it’s gonna stick with [Guitar Ensemble] from here on out, and we may add some events, or tweak some events, to keep it growing.”