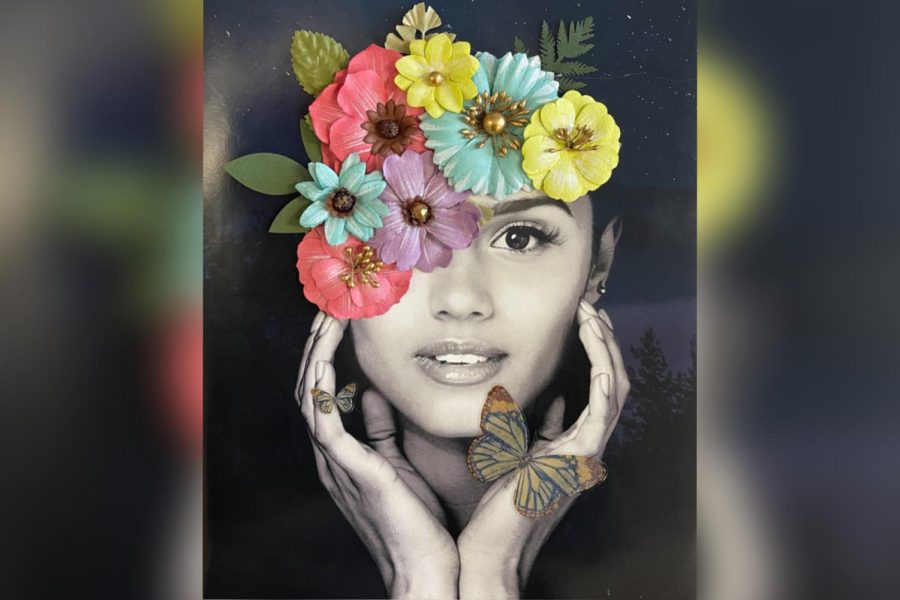 Inspired by the poem "She Walks in Beauty," senior Hannah Newhouse designed this piece for her Synesthesia project. "I was inspired because I like how it values inner beauty and a women's thoughts, rather than just her looks," Newhouse said. "When creating my project I really wanted to display the inner beauty by having flowers growing from the women's head and portraying her inner goodness."

Every year, seniors taking Intro to College Literature have the opportunity to take part in The Synesthesia Project, a long-standing Lafayette tradition in the Language Arts department.

Synesthesia is a psychological phenomenon where people associate one sense with another sense. Someone may hear a sound and see a color for that sound, or feel something for that sound. It’s an overlapping of senses that can enhance two senses by bringing them together.

“It’s been a senior project and tradition way before I was here. It may be that this project has been done for 20 years or so. Back when the class was called British and World Literature, teachers who are now retired started this project. It’s for a college literature class, so they’re studying poetry, drama, prose and so forth. They take something we’ve studied and then they review the original and analyze it, and then what they do is they sort of translate it, sort of like synesthesia, into another form. If you take that written word and you then want to translate that into a song, or you turn it into some kind of sculpture or art piece so you’re taking that original and you’re using an image. The more symbolic it is the better,” language Arts teacher Melissa Schumacher said.

The Synesthesia Project has students analyze both the actions of the characters, but also the actions they themselves make in their physical representation of their original piece.

“The students have to explain each aspect of a poem, they have to tie it back to the analysis of the original poem, and then they have to explain her choices that they used as their synesthesia aspect. It’s an unusual skill, and this is one of those projects where seniors either really like it or they really don’t because having to analyze themselves and their own choices is very different,” Schumacher said.

Students get a chance to be creative and put their own spin to the assignment due to its open-ended nature, every student will make something completely different, For example, senior Naomi Wipfler decided to take on the challenge of doing her Synesthesia Project using food.

“We had to make a model such as a drawing, painting, 3D model, or in my case, a cake to represent a small section of a book or poem that we have read this semester. I wanted to make a cake because it was a creative idea and who doesn’t love cake? I chose The Picture of Dorian Gray, the book we are currently reading. Making a cake look like what I see in my mind when I read the book seemed like a really cool idea. Making the cake and decorating it was really fun and I got to share it with all of my classmates and friends. The two to three page essay I had to write about it was not so fun,” Wipfler said.

Wipfler used several decorations of her cake in order to show her analysis of the poem she chose from The Picture of Dorian Grey.

Over the years, hundreds of students have participated in this assignment. The teachers who give out this assignment also get to be entertained by students’ creativity each year, compiling a list of favorite interpretations.

“It’s hard to say what my favorites would be because I’ve done it for so many years. I have seen a parody of A Modest Proposal written by Jonathan Swift that was particularly skilled, kind of brought into contemporary times that was very skilled writing that someone did probably four or five years ago. It’s really hard, there have been really great examples. I’ve had everything from interpretive dance to sculpture. This year I had a lot of two-dimensional pieces such as a painted piece of wood, paintings, photography and different illustrations, there’s also even a movie that I haven’t viewed yet,” Schumacher said.