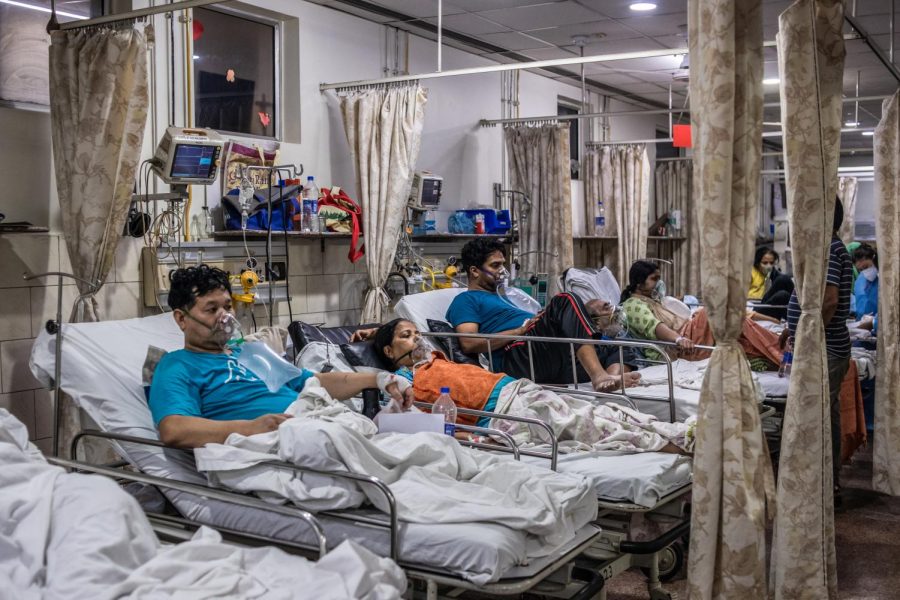 Patients who contracted the coronavirus lie in beds while connected to oxygen supplies inside the emergency ward of a Covid-19 hospital on May 03, 2021, in New Delhi, India. India recorded more than 360,000 coronavirus cases in one day for the 12th day in a row as the total number of those infected according to Health Ministry data neared 20 million.

The images have resonated around the world. Funeral pyres are burning non-stop across India, long lines of COVID-19 patients are outside hospitals due to shortages of oxygen and critical medicine, hospitals are overwhelmed due to the sheer number of COVID-19 patients. That is the urgency of the COVID-19 situation in India. Along with a shortage of oxygen and other critical medical supplies, there has also been a massive shortage in the amount of COVID-19 vaccines, with Indian officials having to close down vaccine sites due to extreme limitations or no supply of the vaccine.

The situation in India has prompted foreign aid to arrive, especially from the United States, France, Germany and several other countries.

With a population of 1.4 billion people, Nagpal believes the Indian government should’ve expected the outbreak of COVID cases.

“Honestly, we should’ve seen it coming because there is already a huge population there, and there are so many variants and obviously [COVID-19] is going to go out of control unless there are some strict regulations, which I don’t think there is,” Nagpal said.

Nagpal has been hearing about the situation from her family and her best friend and has learned that not only is the Indian government not taking the right precautions for its people but also the people of India are not taking the coronavirus outbreak seriously.

“[Chennai] is in lockdown but people are still not following the rules. It’s kinda sad  that India is not very educated on COVID to control it,” Nagpal said.

As of May 12, the entire state of Tamil Nadu, where the city of Chennai is located, has imposed a full lockdown in order to curb the spread of COVID-19 within that state. However, cases are still on the rise.

From what Nagpal understands of the current situation, the leading problem behind the shortage of supplies is the lack of acknowledgement and awareness that India has had during the pandemic. To attempt to raise awareness of the situation, Nagpal posts resources to help India or to educate her peers about the situation to her social media accounts.

“[The United States] has more resources and education on how to deal with it and we have the right vaccines and [India] is obviously out of supplies. To control disease, especially one which is very contagious,  everyone has to do their part. We have to work as a community, and if a country is not working as a community, then other countries have to be involved in trying to make them understand,” Nagpal said.

Junior Arjuin Suresh has family in the southern state of Tamil Nadu, where his relatives have also been affected by the COVID-19 surge in India.

“A lot of my family has been testing positive for COVID-19, mostly among my extended family. Both of my dad’s parents tested positive for COVID-19. It’s been a struggle for them since they aren’t used to dealing with sickness on their own. They usually stay here for a couple years and then they go back for six months to a year,” Suresh said.

Suresh, who has been calling his grandparents and relatives frequently to check up on them, is unsure whether donating to organizations is beneficial.

“It’s hard to know where the money is going if we do donate and what it’s going towards,” he said.

Instead, he and his family have been praying to relieve stress.

“For our family, leaning into our Christian faith has been a big stress reliever and something that bridges the gap between St. Louis and Tamil Nadu,” Suresh said.

Nevertheless, Suresh does believe a person who is interested in helping India should send money to an accredited organization. Suresh also advises people to be cautious of people with family members that live in India.

“Look out for anyone you know who knows people in India, because a lot of them may be hurting and stressing about what’s going on there,” Suresh said, “but may be good at hiding it.”

There are many different organizations, including in St. Louis,  which also have been aiding in the COVID-19 surge in India.  One such organization is the Missouri Tamil Sangam. They are collecting donations on behalf of the American Tamil Medical Association.

“We are collecting funds to support a couple of projects through the American Tamil Medical Association. We are set up through PayPal, anyone can donate, and we thank them for their generous support. For India, it’s providing oxygen concentrators and a decent supply of oxygen,” said Sadayappan Mariappan, treasurer of the Missouri Tamil Sangam.

The Hindu Temple of St. Louis is also running a donation drive to aid India during the surge in COVID-19 cases. The link to that fundraiser can be found here. Once on the website, click the button labeled “Donate for India’s Pandemic Crisis.” That will take you to a PayPal link where you can donate.

“Anything would help. I know people [in India] that have COVID-19, and I’ll research resources for them, we [the United States] are more connected to the world than they [India] are, and we really need to use that power in a positive way, so I feel social media is a great way to do that [spread awareness], because obviously we can’t reach out to them [Indians] without it [social media]. Definitely spread awareness [about the COVID-19 situation in India,]” Nagpal said.