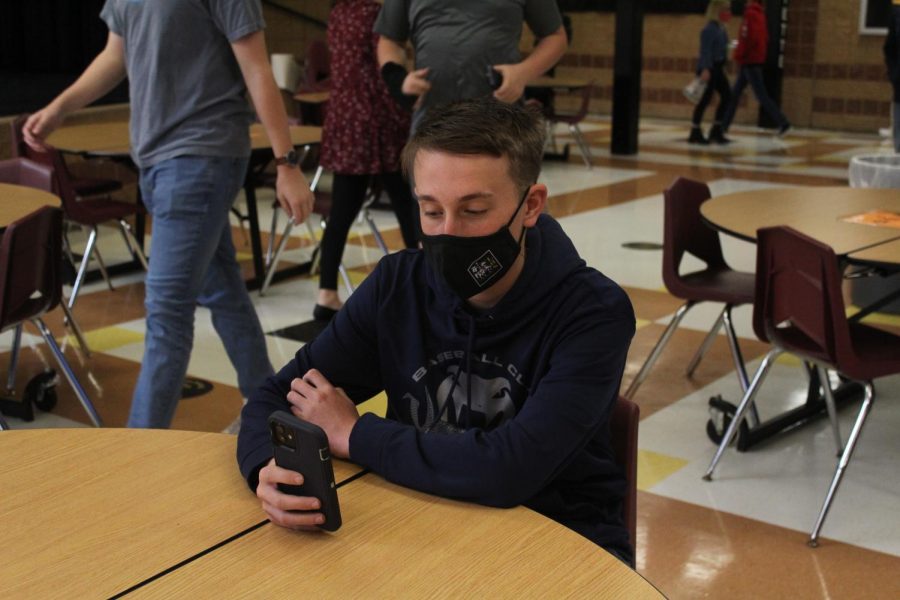 Freshman Ian Branson sits at a table during his lunch period. After returning to in-person school, Branson had to adjust to a new kind of lunch with limited seating.

Until March 29, Ian Branson had been attending school virtually. Branson wanted to make a return for 3rd quarter, but his parents suggested otherwise because of his asthma. However, Branson thought the benefits would outweigh the risk and was able to return.

“I hadn’t met anyone new in about a year and I’d imagine that’s not very healthy for my mental health. I was finally able to see my friends again as it had been a very long time. I knew it would be easier to learn in person because it would be easier to pay attention to an actual person talking in front of you than a screen you can control,” Branson said.

Being on a screen all day every day was a mental drain for Branson. He discussed with his parents and came to the conclusion that he needed more social interactions and decided that school would be the best way to achieve that.

“Finally being able to return back to school was great. I found actually being present makes it much easier to learn and again, interacting with people below the age of 40 to be amazing. I even met some cool new people. Even though I’ve only attended in-person school for a small amount of time, I definitely prefer it over online school,” Branson said.

Branson was nervous about seeing his friends again as it has been months since he last saw them, but returning back to school relieved his worries.

“It was great. I found actually being present makes it much easier to learn and again, interacting with people below the age of 40 to be amazing. I even met some cool new people,” Branson said.

While Branson appreciated the benefits of virtual learning, he prefers in-person learning even though he’s only been there for a short period of time.

“Online school definitely has its perks, for one, waking up at 8:27 was nice and the fact that you could eat whenever was nice. Some parts were tough though. I feel especially for me, it’s more difficult to do something if you have a choice to do nothing. Learning in-person, that choice isn’t really present, which is definitely a good thing. It’s a lot easier to fall asleep during an online class too. Waking up earlier isn’t that bad as long as you go to sleep at a (somewhat) normal time,” Branson said.