Women in Lancer community share their stories about pathways to success 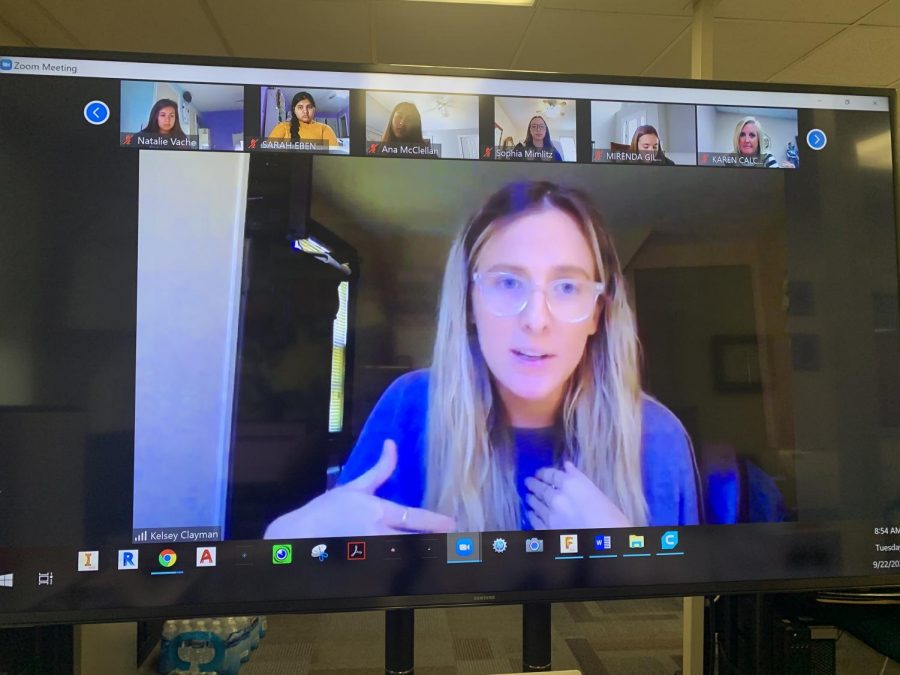 Kelsey Clayman, Class of 2012, speaks during a Women in STEM meeting. Clayman attended Harvard University in Boston, where she also played soccer. She now attends Columbia medical school in New York City and will graduate in May of 2022. Her mother, Lafayette teacher Kathy Clayman, said, "She's never done anything because she thought it would further her. She's done everything out of passion. She will never say 'I can't do it', she will continue working at it until she can do it. She's a really great advocate for women's rights and really the rights of everyone."

Oprah Winfrey. Helen Maroulis. Katherine Johnson. Kamala Harris. All women that influenced and were important role models to the successful women in this article, and all women that are meant to be commemorated worldwide on March 8: International Women’s Day.

In the United States, women spent numerous years protesting alongside other marginalized groups to receive the same rights and respect as men. At LHS, there are many women who have found ways to break gender norms and succeed in their own path.

One of these women is junior Faith Cole, a female wrestler that has tackled the male-dominated sport and continues to improve her strength and skill.

Growing up in the wrestling community, Cole found it rare to encounter another female wrestling her on the mat. Cole would even occasionally notice surprised reactions towards her from parents and coaches while wrestling. Although difficult at first, she overcame the impediment of standing out.

“The hardest thing for me was the feeling of not always being welcome and not being just another athlete,” Cole said. “You learn to ignore negativity and be selfish. Not care about others’ opinions while you train. I found a great environment with great teammates all around the country. The boys wrestlers and coaches at Lafayette are huge supporters of girls and over the last couple years that has been amazing.”

Still, she has found that women in wrestling are not given as much respect as the men in the sport.

With that in mind, Cole said, “It makes you a lot stronger to be able to prove people wrong.”

Proud of her victories, Cole won her first national championship in the summer of 2019 as well as winning a bronze medal inside the capital of Panama during the Pan Am games. Cole is not holding back either, now preparing for Girls State Wrestling on March 9.

“Wrestling has influenced my life more than probably anything. It influences how I dress, how I act on a daily basis, how I respond to negative and positive things in my life. I am very grateful that I started young and was able to grow in so many incredible programs. Wrestling has taught me to be strong mentally and physically,” Cole said.

For young women interested in participating in wrestling or other male-dominated sports, Cole believes it is important to remember to stay confident and to remember that mindset is more important than strength.

“You are as strong as you wanna be,” she said.

Across the school from the wrestling room, senior Aisha Analil serves as the Women in Science, Technology, Engineering and Mathematics (STEM) club president. For her, the club is an important space for high school girls to gain confidence and be inspired to take part in a STEM-related career.

The club meets about once a month to hear guest speakers and have discussions. As president of the club, Analil has to get good role models to present to her club over Zoom meetings and sometimes finds it hard to reach her own expectations for the club.

“One of the most important and difficult parts of being a leader is making sure you create an inclusive environment filled with opportunity. I try to make sure we bring in all aspects of STEM through a variety of speakers and mentorship opportunities so that the interests of all our members are recognized,” Analil said.

Even amidst the pandemic, Analil was able to get speakers to attend meetings for the group and considers it one of her proudest achievements.

“This year, we have had many inspiring speakers join in on our Zoom meetings to share about their professions and my executive team and I have also presented on historical women who have paved the path for the STEM field today,” Analil said.

The Women in STEM club is not only an important club to inform women of these fields, but also encourages young women to consider the male-dominated careers within the STEM fields.

“STEM careers are male-dominated because of gender stereotypes and a lack of role models. These careers are often seen as masculine, causing people to underestimate the abilities of women within the field. In addition, young women have less role models to look up to and inspire them, especially role models who are people of color within the STEM field,” Analil said.

She believes that over time, these fields will be a more equal playing field for women and men and hopes it will also lead to higher positions in these careers as well.

Analil plans on being a physician in the future to help more people. For now, she will continue to lead her club and live by a motto she heard from one of the STEM speakers.

“One motto that really moved me was from Sandra McNeill, a Black woman and electrical engineer, who spoke at one of our meetings. She said, ‘If you can see it, you can be it; and if you cannot see it, you can create it,’” Analil said.