Since the beginning of 2019, there have been 164 homicides in the City of St. Louis. Since April 1, 2019, 13 of those victims between the ages of 2-16 were killed by guns. Sophomore Seraphina Blackmon lives in North St. Louis city, and she has grown up around such violence, but despite her experiences, she still highly regards the area. (Jack Weaver)

Since the beginning of 2019, there have been 164 homicides in the City of St. Louis. Since April 1, 2019, 13 of those victims between the ages of 2-16 were killed by guns. Sophomore Seraphina Blackmon lives in North St. Louis city, and she has grown up around such violence, but despite her experiences, she still highly regards the area.

Despite gun-violence in her neighborhood, Blackmon continues to call North St. Louis home

As sophomore Seraphina Blackmon finishes up her homework, concludes her night and gets ready for bed, she hears piercing cracks and thumps from outside her window. Blackmon has no doubt in her mind of what the cacophonous noises are: gunshots.
“I can hear gunshots every night, but it isn’t as bad on my street. Gang violence is the most common [type of violence] now, but drive-bys used to be the most common,” Blackmon said. “It’s usually at night time, so I personally don’t see it. I can hear it all the time, but I just go to sleep.”
Blackmon lives in North St. Louis County in an area where 67% of St. Louis’ violent crimes occur known as “Hayden’s rectangle” which is named after St. Louis Police Chief John Hayden. The area is enclosed by West Florissant to the North, Vandeventer Avenue and Goodfellow Boulevard to the east and west and Dr. Martin Luther King Boulevard to the south.
In 2018, there were 29 reported homicides, 101 robberies and 286 aggravated assaults with a gun that fell within “Hayden’s rectangle” which was a reduction from 2017 when there were 40 homicides, 108 robberies and 312 aggravated assaults with a gun.

“I feel like [experiencing the violence] makes me a little stronger and less afraid even though I shouldn’t have to feel that way. It makes me feel less afraid of what could happen since there are worse things that are around,” Blackmon said. “I made it normal. I had to make it normal in order to live.”
Blackmon has had even closer encounters with gun violence in her community. When she was 7 years old, she experienced her first drive-by shooting as she was playing outside in her yard.
“My parents had to run and get me, and I had to go in the house. I was scared to sleep by the windows. My parents moved my bed across the room away from the windows, and I put sheets over my windows until I could actually get blinds,” Blackmon said.
As a result of this encounter as well as her knowledge of other acts of violence around North St. Louis, Blackmon has grown accustomed to being attentive to her surroundings.
“I feel safe playing outside now, but when my little cousins come over, they’re like ‘Can we go outside? Can we go outside?’ and I let them go outside, but I just make sure I’m looking. If someone’s speeding down the street, that still strikes fear in me. I’ll go grab them even if nothing’s happening because I get nervous, and I don’t want them to be like me because my cousins are around the same age I was when [I witnessed the drive-by],” Blackmon said. “I don’t want them to be afraid like I was.” 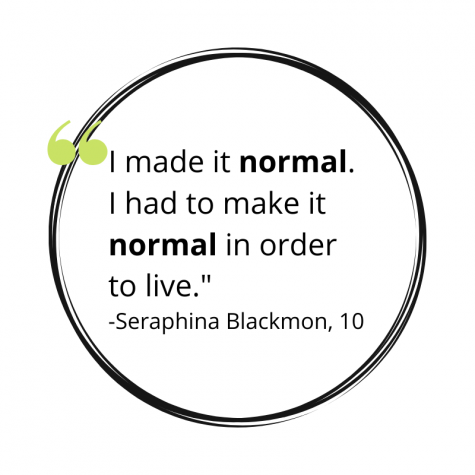 At Lafayette, there are 154 students who live in St. Louis City. A vast majority of LHS’s attendance zone in St. Louis City is within “Hayden’s rectangle.” Brittany Hogan, Coordinator of Educational Equity and Diversity, estimates about half of LHS students who are from St. Louis City live in the northernmost parts of the city.
“As a resident of St. Louis City, the violence that is occurring in our city is beyond concerning. I worry about our families and everyone who is impacted by this senseless violence. We need to remember we belong to one another and regardless of what zip code you may reside in, violence against children impacts all of us, directly and indirectly,” Hogan said.
In fact, as of Oct. 28 there have been 164 homicides in the City of St. Louis since Jan. 1, 2019, 23 of which included victims who were 19 years old or younger. And since April 2019, 13 of those victims between the ages of two and sixteen have been killed by guns in St. Louis City. This violence can have a crucial impact on the physical and mental well being of students even if they aren’t directly involved in the act.
“When any type of trauma such as violence is occurring regularly, there can be both short-term or long-term impacts on a person’s brain and mental health well being. It can cause short-term anxiety or long-lasting effects of Post Traumatic Stress Disorder,” Hogan said.
For Blackmon, the violence she sees in North St. Louis doesn’t have a great effect on her at school or in the classroom mostly due to the fact that she isn’t as fazed by what she witnesses.
“[The gun violence] doesn’t affect how I act, but I see other students that come from North St. Louis, and it affects them sometimes. At about 10 years old or 11 [the gun violence stopped being scary for me] because I knew I had to live through it. I know I can’t complain about it because if my parents wanted to live [in West County], they could, but my family’s all around there, so I don’t want to complain and make it harder,” Blackmon said.

To assist students who are affected by what they experience in St. Louis City, Hogan works with various members of the student service staff to ensure they have the proper tools and training which includes trauma-informed care through Alive and Well STL.

“We work hard every day to make sure our students have a learning community full of adults that are knowledgeable on taking care of the mental well-being of our kids,” Hogan said. “For me, this means being present at LHS, making meaningful connections with students, and asking some of the most simple but important questions: how are you, do you need anything, how can we support you. While our students may not have all the answers, we have enough adults who can help them find those answers and solutions.”
Despite the availability of more than 70 Lafayette staff members trained with trauma-informed care, Blackmon finds the most comfort discussing her experiences with those who share similar experiences.
“I don’t feel like any teacher can connect with me on that level with that situation, so it’s my mom and my other friends from North St. Louis [that I usually talk to about gun violence],” Blackmon said. “[My friends and I] don’t talk about what we’re dealing with. We’re just like ‘Oh. Did you hear those gunshots last night,’ and we’ll be like ‘yeah we heard them,’ or they’ll call and say ‘Did you just see that?’” 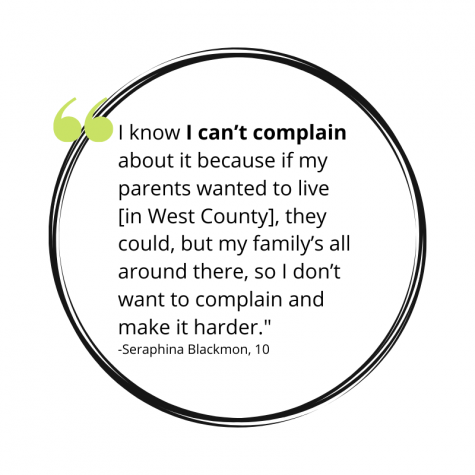 Due to the high crime rates in “Hayden’s rectangle,” North St. Louis is often perceived as a dangerous area that those who do not live there must avoid; however, for Blackmon and roughly 76 other LHS students, it’s simply the place they wake up and go to bed at day in and day out: it’s where they call home.
“It’s not that dangerous downtown. No one is purposefully going to shoot someone unless there’s a reason. No one’s like ‘I see a kid. I’m gonna shoot him.’ It’s usually like the kid is caught in the crossfire which is still bad, but that’s what people think if they’re downtown. It’s usually hate; someone trying to get revenge on someone else, but [people] think that’s what’s going to happen if they come to the city,” Blackmon said. “There’s a lot of stereotypes about living in North St. Louis. I try to beat the stereotypes, but I shouldn’t have to prove myself. It’s harder to make friends here because I’m seen a certain way before I even get to talk to anyone. It’s like ‘Oh. She lives in North St. Louis. She’s aggressive,’ even if I’m not aggressive at all.” 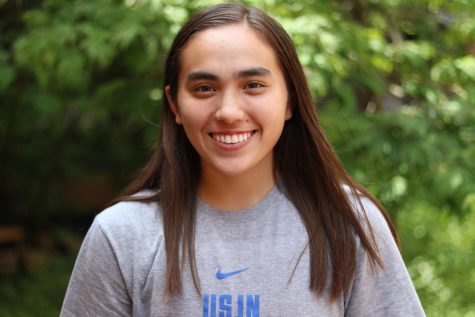 Kayla Carpenter is a senior, and this is her third year on staff. She is a member of the girls basketball team, National Honor Society, Lancers Helping Lancers and Key Club. In her free time, she enjoys petting dogs and reading. After high school, she plans to study pre-med and go to medical school....