Being an immigrant in Trump’s America 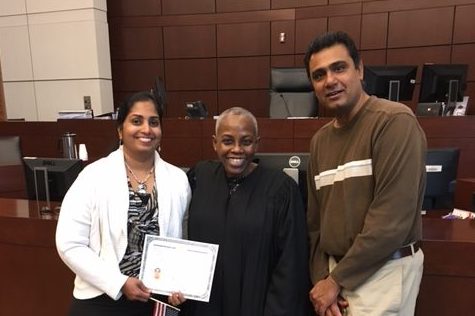 Finally, my mother, Anuradha Sundarrajan gets American citizenship on February 2017.

“Terrorist! ISIL sympathizer! Go back to your own country!”

I sat at my desk, shell-shocked. How could such accusations come out of someone’s mouth? In my seventeen years of living in the United States, I had never encountered such vile words, until now. My beautiful brown skin had never warranted any hate, not until Donald J. Trump decided to run for president. When he made those racist remarks about people of color and threatened to deport Muslims-or anyone who looked Muslim, I grew afraid. Was I going to get deported? Was the president of the United States going to send me back to a country that I only heard stories about? Thankfully, there would be a near-impossible chance that my family and I would get deported- we were permanent residents. Still, the fear lingered in my heart. With an unpredictable man at the helm of this country, who knows what he could do?

So, I spoke to my parents. What was life like before we got a green card? What was our life like on a visa?

My dad, like many others before him, came to the United States on a project his company gave him. It was supposed to be temporary, lasting a few months. After I was born, my mother brought me here, assuming that we’d be living in America until my dad’s project was over.

Just like that, seventeen years have passed, and we’re still in America.

And it’s hard, I’ll admit, being oceans away from my grandparents, aunts, and cousins. We can’t visit them for Thanksgiving or Christmas, or help my ailing grandparents. We can only watch from afar, helpless. We couldn’t make sudden trips back home in case of emergencies because our H1B visa limited us from doing so. And because of visa problems, we suffered a big loss.

One late night on November 9, 2004, we got a call from India. My grandpa suffered a major heart attack, and he’s in the hospital, on life support. We rushed to book tickets, and soon, we were on our way to India. The only problem was that we failed to get our visas stamped-but, we had extension paperwork approved. Because of that, we couldn’t take the fastest route through Europe. We had to go through Singapore, which took longer. But by the time we got to India, my grandfather was dead. He wasn’t responding to resuscitation, so my uncle decided to take him off life support. I only remember seeing my grandfather’s lifeless body in the ambulance. I couldn’t say goodbye to the man who made me laugh or looked at me with pride whenever I tried to speak English. This is what life is like with a visa. Never know when you could be forced to go back, and never being able to plan a spontaneous trip in case of emergencies.

We had only gotten our green card six years ago, after ten years of waiting. We had applied for a green card in 2001, and we were on track to getting it. Unfortunately, our files were lost during 9/11, so we had to start all over again. Instead of taking a few months, it took us years. The immigration system was in chaos after 9/11 happened, and my father was on E3 processing, which is the slowest green card preference, group. When we got our green cards, we were delighted. At that time, I didn’t know what a green card meant to my parents. I just knew that we could go to India now without worrying.

After being a permanent resident for six years, my family and I decided to become citizens of the United States. We applied back in December of 2016, and so far, only my mother has become a fully naturalized citizen. I was so proud of her. My mother, who went through many hardships when she came here with a newborn, proudly stood on that stage, her right hand raised as she recited the Pledge of Allegiance. I remembered her telling me that she never planned on living here- she always thought she’d return to India. Now, there she was, the first member of my family to become a naturalized United States citizen. 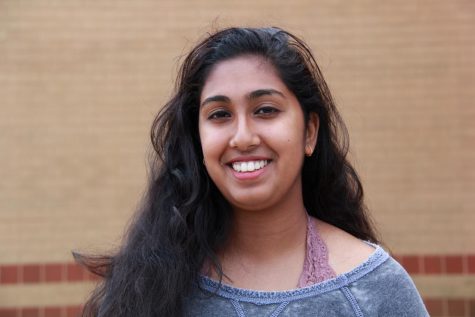 Shwetha served on staff for three years before graduating.

One Response to “Being an immigrant in Trump’s America”